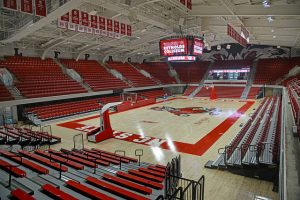 Reopened in September 2016 following a 16-month renovation, the building achieved Leadership in Energy and Environmental Design (LEED) certification at the Silver level in March 2017.

The 186,000-square-foot multipurpose arena originally opened in 1949 and is one of campus’ nine hallowed spaces, which prompted the university to renovate the aging building instead of replacing it.

“Among the most significant sustainability efforts of this project is that it’s a renovation, not a new building,” said Liz Bowen, an NC State sustainability program coordinator specializing in the university’s built environment. “A renovation allowed the building’s historic elements to be preserved and existing materials to be reused when possible.”

Other sustainability features of the facility include:

Reynolds is the fifteenth university building since 2011 to earn LEED certification, bringing the total amount of LEED-certified space on campus to more than 1 million square feet.