NBA, union agree to list of social messages that can be put on jerseys

NBA, union agree to list of social messages that can be put on jerseys 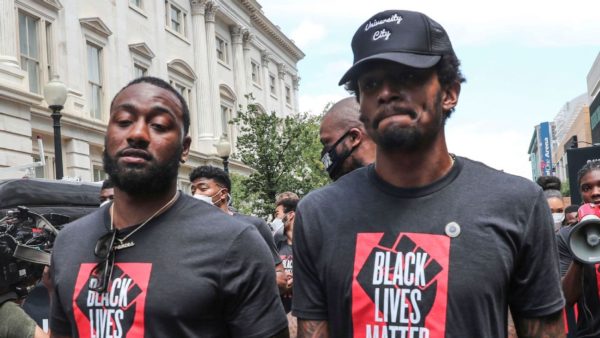 The National Basketball Players Association and the NBA reached an agreement Friday on social justice messages that can be displayed above the numbers on the backs of jerseys when the league resumes play July 30, a source told ESPN’s The Undefeated.

The list of the suggested social messages that were agreed upon by the NBPA and the NBA and then made available to players via email, per the source, are: Black Lives Matter; Say Their Names; Vote; I Can’t Breathe; Justice; Peace; Equality; Freedom; Enough; Power to the People; Justice Now; Say Her Name; Sí Se Puede (Yes We Can); Liberation; See Us; Hear Us; Respect Us; Love Us; Listen; Listen to Us; Stand Up; Ally; Anti-Racist; I Am A Man; Speak Up; How Many More; Group Economics; Education Reform; and Mentor.

The messages will be displayed above the number during the first four days of the season restart, a source told The Undefeated. Players can have a first and second choice, but they do not have to use the space for a social message, the source said. If they do not, the player’s last name would appear in that space.

After the first four nights, a player can simply go back to their last name. If they choose to continue showing a social message, their name would go below the number.

The personalized statements are part of a long list of social justice messages the players plan to deliver over the rest of the season, which will restart at the ESPN Wide World of Sports Complex in Orlando, Florida.

The NBA and NBPA announced an agreement on June 24 to continue to discuss fighting systemic racism and to make it one of the focuses of the restart.

Earlier this week, a source told The Undefeated that players decided not to use the names of those who have died in police custody or in racially motivated incidents on the backs of their jerseys. There were concerns about offending people close to someone whose name might not be used, and over difficulties gaining permission from surviving family members.

NBA players were involved in nationwide protests, vocal on social media and active in the aftermath of George Floyd’s death on May 25 in Minneapolis and Breonna Taylor’s death on March 13 in Louisville, Kentucky, at the hands of police.