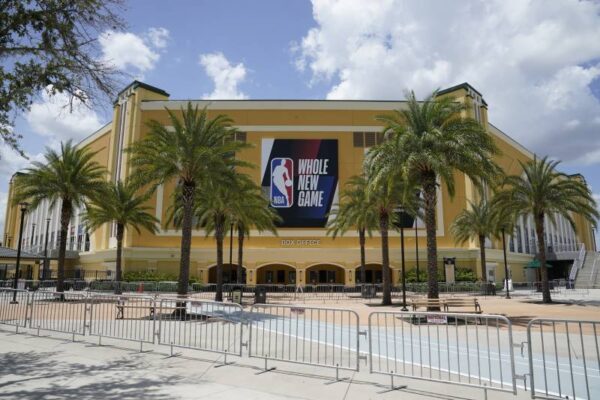 The NBA will provide thousands of COVID-19 tests to various areas around the country as part of the NBA Together campaign, the league announced Wednesday.

“Public health data has made clear that the impacts of the coronavirus are most concentrated in historically marginalized communities of color where access to testing is scarce.” the league said in its statement. “To meet this need, the NBA collaborated with UnidosUS and the National Urban League as well as several private laboratories to identify communities most in need and provide access to no-cost testing programs in addition to communicating public health information to community members.”

Additionally, the NBA is providing free, daily testing at a mobile collection site in Orlando, Florida, where the league is preparing to resume the season Thursday. Appointments can be made for a test at Appointments.BioReference.com/NBAOrlando.

The news follows the NBA’s latest release of its own internal testing results, which found the Florida bubble has remained intact.

Of the 344 players currently on the campus of the ESPN Wide World of Sports Complex, zero tested positive for the coronavirus. No players have tested positive since arriving at the bubble in mid-July. Those test results are also being reviewed in numerous academic studies on pooled testing and rapid turnaround testing to assess outbreak control and management.

Now the league is working to ensure it is taking care of the communities most at-risk across the nation.

Not only have the NBA and WNBA recorded more than 45 public service announcements, but they have also partnered with a national coalition of health officials to drive donations of plasma from those who have already survived COVID-19.

Including the site in Florida, the NBA has Federally Qualified Health Centers in all 30 local team markets and has donated tests to those facilities.

Plans to make testing available nationwide through basketball were first approved through the league’s health and safety protocols to return to play in 2020.