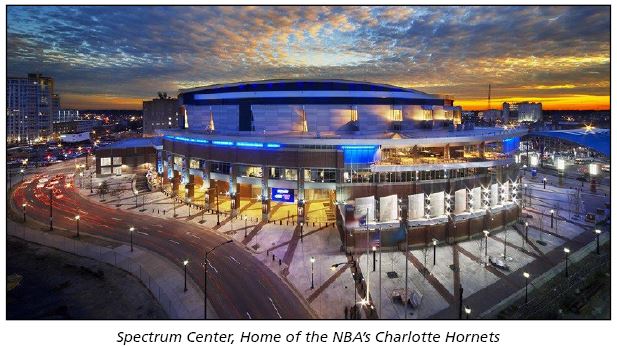 As part of an ongoing effort to highlight dedicated and passionate organics recycling and diversion programs across the country, Natur-Blog spoke to the team heading up the recycling program at Charlotte, NC’s Spectrum Center, home of the Charlotte Hornets. This is a summary of how their program was founded and the success they’ve seen since its inception.

With tens of millions of viewers tuning in each night to watch their favorite National Basketball Association (NBA) teams, it’s becoming increasingly vital for these teams and their homes to be cognizant of the power they yield when making a difference in the world, especially with so much emphasis being placed on the environment and sustainability in recent years.

The Charlotte Hornets were fully aware of this responsibility when in early 2015 they began talks with the Charlotte Regional Visitors Authority (CRVA) and the city of Charlotte to develop and install a comprehensive recycling plan. As organics recycling and composting was nonexistent at Spectrum Center at the time, the only way was up.  This wasn’t going to be an overnight success and there were no such expectations, but Spectrum Center and CRVA staff aimed to be part of one of the most sustainable organizations in the NBA and it was clear that the time was right to launch such a program.

“With hundreds of thousands of patrons passing through our doors each year, it is important for us to understand the impact our waste has on the environment,” said Spectrum Center General Manager Donna Julian. “Through the addition of recycling and composting, we have been able to significantly cut down the amount of waste coming out of our building.”

Upon the program’s inception, the primary focus immediately turned to recycling as the platform to build on. First efforts were largely shaped thanks to a collaboration with Waste Management, who assisted Spectrum Center and CRVA staff in forming their program by providing them with a waste characterization study which analyzed Spectrum Center’s waste generation and collection efforts over a six-month period. Contamination is always a concern as it relates to recycling.

Not only does it affect the quality of the materials captured, it will add downstream process burdens that result in increased costs. In an effort to help address this concern, Waste Management provided Spectrum Center with a specialty single stream waste bin which was instrumental in reducing contamination while aiding collection efforts. Because of this bin and dedicated inspection of bins and bags, contamination has been contained to a minimum since the program began.

With the help of the waste characterization study, over the next six months Spectrum Center began to work with vendors and service providers such as Jani-King, SupplyWorks, Levy Restaurants, Earth Farms, and the aforementioned Waste Management to develop the steps needed to meet the NBA’s blossoming “green” movement. Regularly scheduled internal meetings which involved various stakeholders were vital, as was constant feedback from all of those involved. These meetings helped shape the future of the program on a real-time basis while identifying opportunities for growth. Out of these partnerships came a system where separate vendors pick up food scraps, corrugate, grease, shredded paper, and pallets, while Waste Management serves as the aluminum and polyethylene terephthalate (PET) plastics hauler.

Though there are many challenges to work around and overcome, having strong partnerships is essential with the goal of achieving a robust recycling program with maximum buy-in from all involved.

“We would not be able to undertake this effort without the assistance of all of our vendors and service providers,” Julian said. “From our food and beverage partner, to our janitorial staff, to the companies that help us with recycling and combustion, having each group play its part has been critical to our early success.”