In recent years, NASCAR has taken steps to reduce the carbon footprint of a sport that relies on gas-burning cars while embracing sustainability throughout its organization. From improvements in fuel mixtures to innovative speedway designs to engaging and educating fans, NASCAR is bringing green initiatives to motorsports. 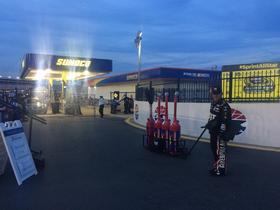 Thousands of solar panels have been installed at tracks around the country, mitigating dependence on traditional sources of electric power. Other tracks have begun utilizing geothermal energy to manage air conditioning systems at their tracks. Beyond the speedways on its circuits, NASCAR has also planted over 370,000 trees to help improve air quality.

In 2011, NASCAR also began to mandate the use of a 15-percent ethanol blend in its stock cars. Initially contested by some drivers, teams, and fans, the switch has reduced emissions by 20 percent without affecting performance. “It feels like home. It just seems like we’ve been using it for years and years and years,” Dale Earnhardt Jr. said about the fuel blend. “We used to have concerns about how it would perform, and it’s an afterthought at this point as to how it affects performance.”

Moving forward, NASCAR continues to seek ways to further reduce its environmental impacts while using its platform to spread the message. “The more that we can demonstrate the impacts that we can have to improve and reduce our carbon emissions – any part we can do, we think that’s important,” said NASCAR chief operating officer Brent Dewar.