There is hardly another platform in existence that garners as much attention and loyalty than the world of sports.

Greening of the Great Lakes host Kirk Heinzewelcomes both Jason Gasperich, the director of sustainability for Connor Sports and Justin Zeulner, the chief operating officer for the Green Sports Alliance, to talk about their mutually beneficial relationship and ongoing sustainability initiatives.

Connor Sports is a world-renowned company in Michigan’s Upper Peninsula that manufactures basketball courts, including the NCAA Final Four court every year. Connor Sports recently received a grant from the US Forest Service that will be used to make modifications to their plant’s boiler system. More specifically, it will make the system completely automated. Once the boiler has been lit, a computer will take over and constantly make any needed adjustments. 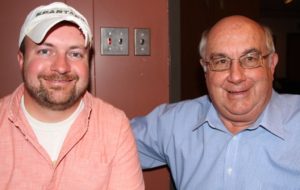 Here is how this new boiler system, sustainability, and the US Forest Service all tie together. As of right now, the plant burns biomass as its primary fuel source and purchases propane as needed. By improving the efficiency of the boiler system, the company will not only be saving money and energy, it will reduce the amount of propane/fossil fuel it needs. The excess residue left from burning biomass is given to other businesses to use and create sustainable products.

Connor Sports is also going into its fifth year as a part of the Green Sports Alliance, which is an organization that leverages the cultural and market influence of sports to promote healthy, sustainable communities.

“Connor Sports and the Green Sports Alliance have a similar vision: to improve the quality of life for people around the planet,” Gasperich says.

The Green Sports Alliance began as a small local initiative and is now a worldwide movement.

“We are harnessing the energy and enthusiasm of sports fans to advance environmental stewardship through a nonpolitical medium,” explains Zeulner.

Two initiatives The Green Sports Alliance is involved in are waterless urinals and the 1,727 solar panels installed on the roof of The Staples Center in Los Angeles. More than just the act of installing these improvements, how The Staples Center is truly using its athletic platform is through the informational plaques around the facility that explain to fans how and why they are making these improvements. These signs have prompted other business owners and individuals to follow in their footsteps and make green improvements themselves.

Football, basketball, baseball and several other sporting leagues have now begun to reach out and ask for fan support of sustainability initiatives while attending and watching games. For example, food composting and recycling initiatives at sporting events have been successful and have saved thousands of pounds of waste from going to the landfills at virtually no extra cost.

Connor Sports was one of the first businesses to join this initiative and blazed the trail to include the private sector into environmental responsibility in the sports world.