Mercedes-Benz Stadium Brings Sustainability to the Forefront of Sports

Mercedes-Benz Stadium Brings Sustainability to the Forefront of Sports 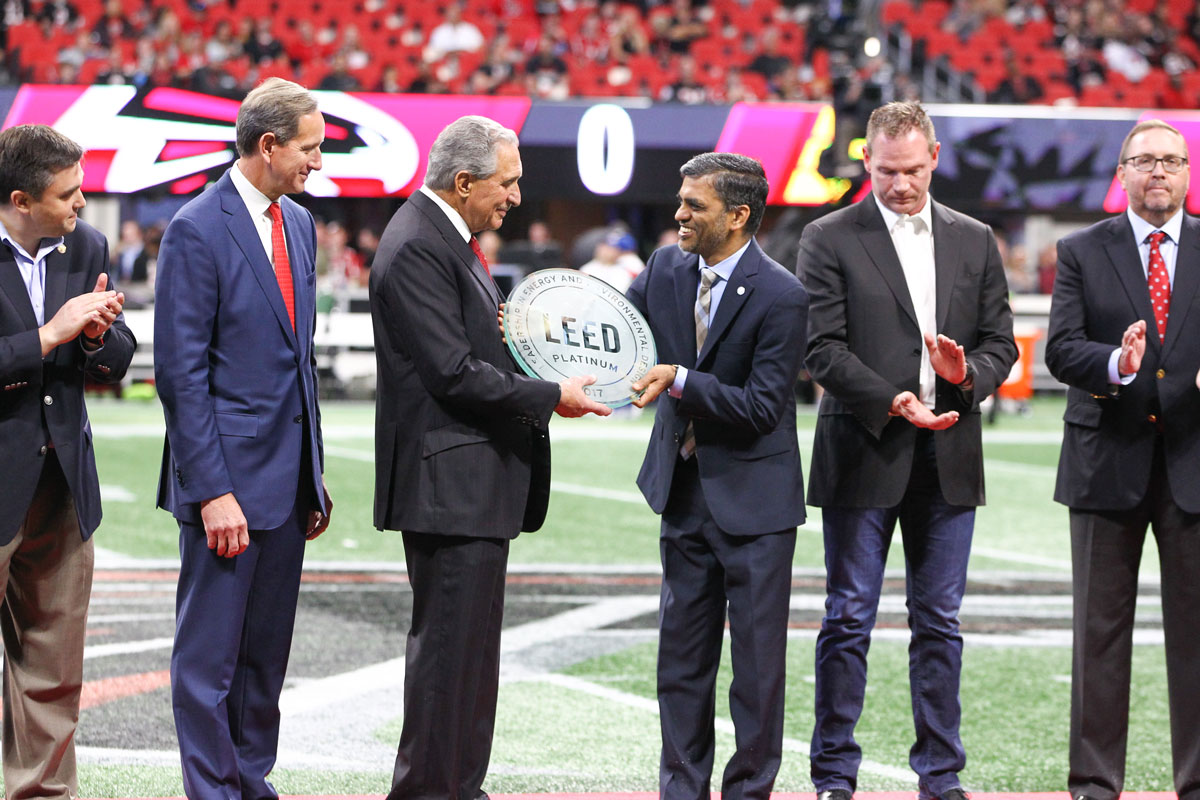 When Arthur Blank, owner of the Atlanta Falcons and Atlanta United, and his team of designers envisioned the new Mercedes-Benz Stadium in Atlanta, they set out to do what had never been done. “We wanted to redefine the stadium experience,” says Scott Jenkins, who joined the team in 2014 as stadium general manager, just as they broke ground. “Every step of the way, while we were focused on the fan experience, we were also focused on making the venue as environmentally smart as we could,” says Jenkins, a pioneer in the green building movement in sports and chairman of the Green Sports Alliance.

The 2 million-square-foot, $1.5 billion project was designed by HOK, who worked with BuroHappold Engineering and Hoberman Associates to complete the stadium in July 2017. Home to the Atlanta Falcons and the new Atlanta United soccer club, Mercedes-Benz Stadium opened its doors to a sell-out crowd of 72,000 for its first soccer match in August 2017. In November 2017, the stadium was awarded LEED Platinum, making it the first professional sports venue in the world to achieve that level. To be LEED certified, a building must acquire 40 points—to reach LEED Platinum, an additional 40 must be acquired. Blank and his team scored 88 points, carefully considering every line item in categories like building materials, energy, water, and site location. Jenkins says, “Our approach was to go after everything.”

Most visibly, the stadium’s sustainability features include 4,000 solar panels placed not on the rooftop but, as part of the aesthetic, at eye level on ticket entryways and parking lot canopies. The panels generate enough energy to power nine Falcons games or 13 United matches. The advanced storm water management program includes an on-site 2.1 million gallon storm water vault, bioswales, and a 680,000-gallon cistern for collecting and reusing rainwater for a cooling tower and irrigation. This combined with water-efficient fixtures resulted in a 47% reduction in domestic water use. Plus, given the stadium’s location west of downtown—where neighborhoods have been plagued by flooding for years—it was important to Blank and his team to reduce the venue’s contribution to local storm events.