After the greatest weekend of Elite Eight games ever — all four went down to the wire, with two going to overtime — the Men’s Final Four is now set. This Saturday evening in Minneapolis, Auburn takes on the University of Virginia and then Texas Tech and Michigan State will go at it.

While the ESPN’s and SI.com’s of the world will analyze the on-court matchups in detail throughout the week, GreenSportsBlog digs into each school from a Green-Sports point of view.

And, we also take a look at Green-Sports goings on at Oregon, Baylor, Notre Dame and UConn — the participants in the Women’s Final Four in Tampa.

Charles Barkley, the greatest basketball player in Auburn history, was overcome by emotion after his alma mater’s thrilling 77-71 overtime victory over favored Kentucky sent the school to its first Final Four. He wiped back tears in the game’s immediate aftermath, calling the win “the greatest day in Auburn basketball history” on the CBS Sports postgame show.

The Naismith Basketball Hall of Fame member would likely need to have tissues at the ready if he were to read our January story about Auburn’s growing Green-Sports résumé. In “Auburn Athletics: Green-Sports Grows in the SEC,” Barkley would learn that, per Mike Kensler, Auburn’s Director of the Office of Sustainability: 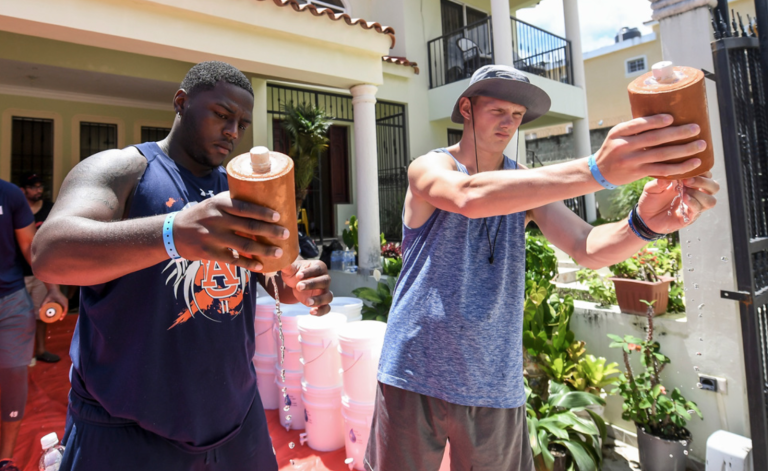 Auburn football players Dontavius Russell and Daniel Carlson drain and assemble the filters before they are inserted into the buckets in the Dominican Republic in 2017 (Photo credit: Auburn University)

And while there’s no way of knowing if the Tigers (also, for some reason, known by the “War EAGLE” battle cry) will qualify for the 2020 Men’s Final Four at in Atlanta, there will definitely be an Auburn flavor to the event from a green point of view. Per this 2018 GreenSportsBlog interview, Carlie Bullock-Jones, CEO of sustainability consulting firm Ecoworks Studio, and an Auburn grad (“War Damn EAGLE!”), played an important role in helping Mercedes-Benz Stadium achieve Platinum status.

If you are a UVA fan, you still probably can’t get enough of seeing THIS:

It took that miraculous last millisecond bucket by Mamadi Diakite for Virginia, off of that amazing whip pass from Kihei Clark, to send its Midwest Region final against the gutty Purdue Boilermakers into overtime. The top seeded Cavaliers then took care of business in the extra frame, winning the “Game of the Tournament” (so far) 80-75, earning the school its first Final Four berth since 1984.

Malcolm Brogdon, Virginia Class of ’16, only made it as far as the Sweet Sixteen during his four seasons in Charlottesville. But the Milwaukee Bucks guard is making UVA alums proud through his Hoops₂O initiative. Brogdon and four other NBA players¹ are working to raise funds and awareness for clean water initiatives in East Africa. Fans donate to the program in the name of one of the players, with the players matching those contributions dollar-for-dollar. So far, Hoops₂O has raised $164,000 towards its Year One goal of $225,000. Click here to contribute.

Brogdon was inspired by Waterboys, the program midwifed by former Virginia football star Chris Long. The two-time Super Bowl champ and 2018 Walter Payton NFL Man of the Year Award winner, along with support from more than 20 current and retired NFL players, funds the digging of wells in the area and teaches the locals how to operate and maintain them.

Since its inception in 2013, Waterboys, now officially connected to Hoops₂O, has raised more $2.6 million to fund 55 wells that will provide water to over 205,000 people.

Run a Google search on “Texas Tech University Athletics Sustainability” or something similar and you get several links to articles about…the University of Texas. This is to say that, so far, Red Raiders’ Athletics has not yet embraced Green-Sports.

Yet the university is a leader when it comes to climate change communications despite being located in the politically and religiously conservative West Texas city of Lubbock.

That is thanks largely to climate scientist Dr. Katharine Hayhoe, Director of the Climate Science Center at Texas Tech and arguably the world’s most powerful climate change communicator. In fact, Time Magazine named her to its “100 Most Influential People in the World” list in 2014.

Dr. Hayhoe spoke with us in 2016 for GreenSportsBlog’s “Green Leaders Talk Green Sports” series. Here’s an excerpt that focuses on how sports can play an important role in the climate change fight (click hereto read the entire interview):

Katharine: Science is the foundation but what connects with people, what binds them together — shared values — turns out to be bigger than the science! And the pathways in our brains that are used to solve issues respond more to the shared values approach than the scientific. And community and shared values, that’s what sports is all about. Sports is part of our collective shared identity. It builds community. And this goes back millennia to Roman times and chariot races.

GSB: So how do you think sports can play an important role in building awareness and action among fans? Many times, when I ask why more athletes don’t get involved, I hear that “climate change is too complex!” But if what you’re saying is right — and I think it is — athletes don’t need to worry so much about the science. They need to emphasize the importance of the solutions to the communities where they play!

KH: Exactly. Now some sports are effected more directly and more in the present than others. Hey, I’m Canadian, so I get that hockey and other snow sports are deeply concerned about the effects of climate change on their sports in the here and now. That’s why it’s great that Protect Our Winters and the National Hockey League are leading the climate change fight. Hey, we’re a skiing family so we see a shorter ski season. I’m also a sailor and so the effects of increased ocean acidification are powerful as they are obvious…But athletes in sports that don’t have as direct a link as those we mentioned can certainly get involved. Look, I often talk about the Six America’s of Global Warming. Basically, Americans fall into six groups as it relates to global warming/climate change: From most engaged to least, it goes like this:

I think for now at least, we’ll leave the Dismissives — they’ll be very hard to move. But I’ve found the way to communicate with the Cautious, Dis-engaged and Doubtfuls is to emphasize shared values and concerns, and then you can move them. Sports is as powerful, as passionate a platform as there is to move masses of people.

Michigan State can lay claim to being the greenest school in this year’s Final Four on at least one metric: It is the only one of the four to have green as one of its school colors.

In addition, its Sustainability Office:

GreenSportsBlog interviewed Dr. Eva Kassens-Noor, Associate Professor in Michigan State’s Global Urban Studies Program, in 2015. In this excerpt, we discuss the sustainability legacies of the London 2012 and Rio 2016 Summer Olympics.

GSB: How did sustainability figure into London 2012?

Eva: Legacy and sustainability were central tenets of the London 2012 bid. The facilities that were built for the Games, for the most part, have found significant post Games use, often for the general public. The Olympic Stadium will become the home of West Ham United Football Club of the Premier League starting next season.

GSB: Now let’s look to Rio 2016. Plenty of media outlets have tackled the environmental problems related to the polluted waters of the sailing and rowing venues. But what about its legacy?

Eva: I’ve been very critical of Rio in terms of legacy…

GSB: Why? We wrote about the additional Bus Rapid Transit (BRT) lines in Rio that are Olympics-related (links here and here). That should be a carbon footprint reducer, no?

EKN: You would think so but the Olympic Village and the BRT plowed through many Favelas, removing hundreds of families and businesses. The route of the BRT is also problematic — one of the routes goes from the airport to a wealthy area without going through downtown. Very ineffective.

BRT will play a significant role in transporting fans to and from this weekend’s Final Four in Minneapolis. GreenSportsBlog is heading to the Twin Cities and will report on what, arguably, is the greenest stadium and arena inventory of any metropolitan area in North America.

As far as the basketball is concerned, I picked Michigan State to beat Virginia in the championship game before the tournament began and so will stick with that².

WHAT ABOUT THE WOMEN’S FINAL FOUR?

From a Green-Sports perspective, the University of Oregon looks to be the favorite, but all four schools have a story to tell.

The Eugene-based university is a member of the Green Sports Alliance, as is the PAC-12 Conference. It participates in the league’s Zero-Waste Challenge, a series of waste-reduction competitions that engage fans in sustainability, develop best practices, and provide an outlet for friendly environmental competitions. And Sabrina Ionescu, the Ducks’ All America guard, took part in a PAC-12 Team Green promotional 15 second video.

Baylor University, located in Waco, Texas, has been recycling since 2015, at McLane Stadium, the 45,100-seat home of Bears football.

Notre Dame’s Green-Sports initiatives are mainly focused on waste generated at Notre Dame Stadium, the 80,795-seat cathedral of Fighting Irish football. The Go Irish. Be Green. program features teams of volunteer students circulating through the tailgate lots, distributing blue recycle bags to fans and answering questions about single stream recycling. And they also produced this sustainability-themed video for the 2018 season.

The big question is where has this video been shown: In stadium? On Notre Dame football broadcasts? To date it has received only 64 views on YouTube.

UConn, through its EcoHusky student group, has hosted women’s and men’s Basketball Green Game Days at Gampel Pavilion over the past several years. Starting in 2017, the university’s Office of Environmental Policy purchased carbon offsets to be able to make the claim that the games were carbon-free. P.A. announcements, video board mentions, and social media posts during the events promoted the greening initiative to fans.