Delaware North Sportservice, which provides food, beverage and retail services at more than 50 sports venues across the country, and its environmental stewardship platform GreenPath® is committed to maintain the highest sustainability standards at its ballparks, arenas and stadiums.  Delaware North Sportservice’s team at Progressive Field, along with its partner the Cleveland Indians, have implemented a system to not only cut down on waste at the ballpark, but also convert it into renewable energy.

Progressive Field hosts thousands of fans each year and produces hundreds of tons of waste from unused food and other products. Much of this waste, however, can be diverted from landfills and converted into an energy source.

By partnering with Grind2Energy, the team at Progressive Field installed a system to collect waste that will eventually be turned into energy. Organic waste from the ballpark is collected after each game and pushed through a commercial disposal and piped into a large tank.

When the tank is full, our end user collects the waste and trucks it to their nearby facility, where is it converted through anaerobic digestion into electricity. The facility is completely self-sustaining and any remaining electricity is pushed into the Cleveland Public Power grid. The unprocessed organic waste (after digestion) is then turned into organic fertilizer. 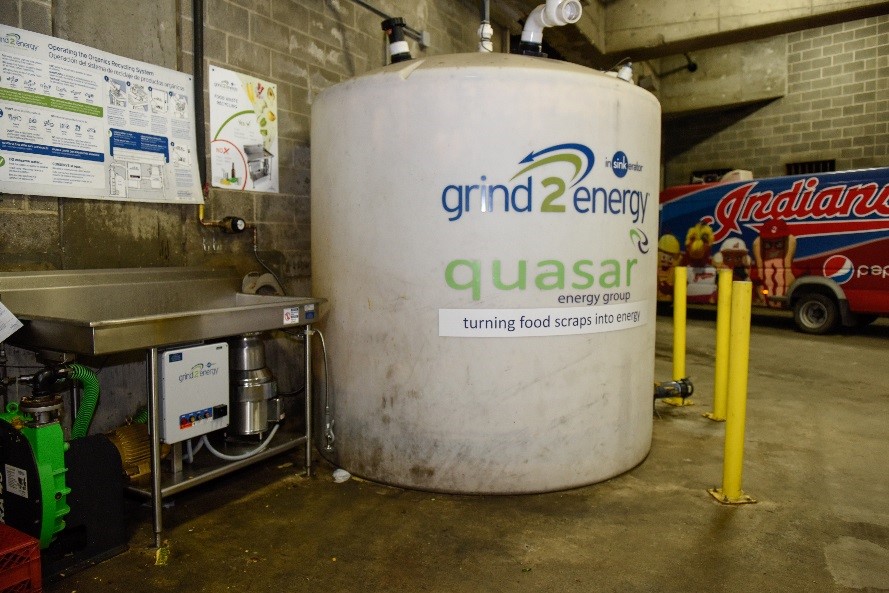 Working with the Cleveland Indians, the majority of initial cost of the waste collection system was covered by a grant through the Ohio EPA.