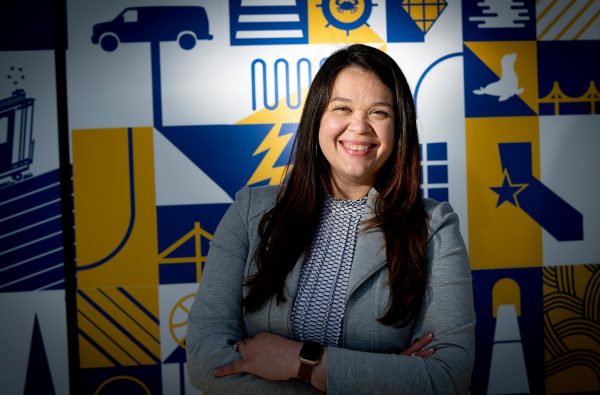 Warriors’ director of facility health and hygiene Jackie Ventura’s protocols for the return to basketball activities at Chase Center ran about 65 pages.

Jackie Ventura was outside her office at Chase Center in March 2020 when she saw the breaking news on ESPN: NBA suspends season indefinitely after Jazz center Rudy Gobert tests positive for coronavirus.

“All I remember thinking was, ‘Oh my God,’” Ventura, the Warriors’ director of facility health and hygiene, recalled recently.

For two months, Ventura and her staff had prepared for the possibility of fan-less games as the coronavirus pandemic loomed. What she couldn’t have anticipated then, however, was that the Warriors wouldn’t host spectators again for well more than a year.

When about 1,700 paying customers filter into Chase Center for Friday night’s nationally televised matchup against the Nuggets, it will mark the first time in 409 days that fans have watched a Golden State home game in person. Those 13-plus months without ticket-buyers have cost the Warriors hundreds of millions of dollars in projected revenue and raised questions about the organization’s approach to roster-building.

Though Golden State was valued last month by Sportico at $5.5 billion, just less than a quarter of its worth is tied to its state-of-the-art arena in Mission Bay. Without the cash infusion of tickets to games, concerts and other events at privately financed Chase Center, Warriors majority owner Joe Lacob has had to reassess his spending, including a record-setting payroll.

All indications are that Lacob is still willing to pay big to maximize what’s left of Stephen Curry’s prime, and it helps that Golden State will have fans at its final nine home games this season. Of the hundreds of employees who made possible the return of spectators to Chase Center, Ventura, a Miami native with nearly two decades of experience in facility management, was among the most instrumental.

Since she learned of the NBA shutdown last year, she has worked long days devising protocols. Every phase of the Warriors’ transition back to playing in front of fans has required detailed outlines on how the team would prioritize people’s health and safety. Over the past 10 months, Ventura wrote exhaustive memos for city health officials so Golden State could host offseason minicamp, training camp, a regular season and, finally, fans.

Her protocols for the return to basketball activities at Chase Center ran about 65 pages. In them, Ventura broke down how the Warriors would fly, practice, eat, play games and even sit on the team bus while adhering to league-mandated coronavirus guidelines.

“What it made it hard was we were learning all about the virus in real time,” Ventura said. “So much research went into every memo, every protocol.”

The protocols to get fans back at Chase Center, on which Ventura’s team started working days after the shutdown, are just as nuanced. In the five months since the city rejected the Warriors’ plan for 50% capacity, Ventura has worked to have an answer for any question public officials might ask.

In addition to outlining Golden State’s plan to test every fan who’s not fully vaccinated, she detailed guidelines for spacing, masking and disinfecting. Before and after each game, cleaners will use electrostatic sprayers to hose down every seat and surface with cleaning solution. The Chase Center’s HVAC system will change the air in the bowl four times per hour.

At a news conference last week, Ventura’s boss, Chase Center general manager Kim Stone, told reporters, “The No. 1 goal is making sure we emerge from this as the safest arena in the country.” She should know what that takes. Before Stone joined the Warriors in 2019, she ran American Airlines Arena — a 19,600-seat venue in Miami widely considered one of the safest and most environmentally friendly arenas in the world.

One of Stone’s first hires was Ventura, with whom she had worked for 18 years. In her time with the Miami Heat, Ventura built a reputation as an innovative thinker and dogged worker, going from answering phones in the parking office to overseeing the sustainability and operations department.

Under Ventura’s watch, AmericanAirlines Arena became the first entertainment venue in the world to twice earn a Leadership in Energy and Environmental Design (LEED) certification. Ventura’s time with the Heat coincided with such public-health crises as the Zika virus, H1N1, SARS and several severe hurricanes. But in her estimation, none of those challenges compared with the obstacles the coronavirus has presented.

“Everything else crisis-wise that I’ve had to deal with in the past has had its moment in time,” Ventura said. “This one has been a sustained crisis for a year. I think that’s been the most difficult part of it to deal with.

“We lay out 100 plans, and 99 of them get tossed out because things change from one week to the next.”

When spectators return to Chase Center on Friday, Ventura will feel a mix of excitement and nerves. An unexpected setback could undo much of her team’s work and force the Warriors to return to fan-less games.

Nevertheless, she considers her top responsibility crisis management, and she’ll make sure she’s prepared for whatever could happen. Odds are that the Warriors will have no major issues and slowly ramp up to roughly 6,300 fans in attendance — about 35% of Chase Center’s capacity — by the end of the regular season.

If that happens, Ventura hopes to treat herself to a much-needed vacation. “I guess it depends on which countries are going to be open by then,” Ventura said with a chuckle.