Mary V. Harvey Looks at What it Means to be Green in the Sports World

Mary V. Harvey Looks at What it Means to be Green in the Sports World

Former World Cup champion and Gold Medal–winning soccer goalie Mary V. Harvey has been an active part of the American and international sports scenes on and off the field for nearly three decades. She has been environmentally conscious for even longer. Upon returning to the U.S. in 2008 after a five-year stint with FIFA overseas, she became chief operating officer for Women’s Professional Soccer and began looking for her “next opportunity to give back.” After a chat with Green Sports Alliance Executive Director Martin Tull, her search was over; several months later she was on its board. The position enables Harvey, who now serves as principal of Ripple Effect Consulting, to combine her lifelong passions to great effect. 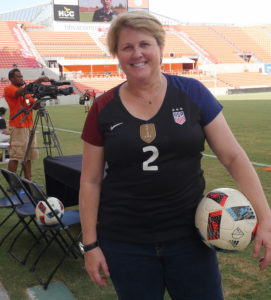 gb&d: You went from high-profile player to high-profile advocate. How did you become involved in environmental issues?

Harvey: It’s an interesting progression, I suppose. I grew up in Northern California, and two things happened during my early teenage years. One is that that first drought of ’76, ’77. I remember water rationing. I remember putting bricks in the toilet and everybody’s lawns were dying and we were using the laundry water to water plants. I remember my mom painting, with fingernail polish, what 13 gallons looked like on the bathtub. And to this day, I take two-minute showers. You go through something like that, it makes an impression. The other thing that happened growing up is that the family next door, their oldest son became a really early advocate for recycling. So at an early age, I had an awareness of the importance of reusing.

gb&d: What does it mean to be green in the sports world?

Harvey: The origins of the green sports movement are a bunch of stadium operators in the Pacific Northwest who are in this environmentally conscious community—Seattle, Portland—and they’re trying to match up the values of the community with how the stadium operates and conducts itself. Because people in these communities come into these stadiums and they don’t see things that they’re used to seeing and they’re like, “What’s going on here?” So there’s an expectation [from] fans and communities, when they go to professional sports [events], that the professional sports organizations are going to mirror the values they have.

gb&d: What is the Green Sports Alliance doing to educate the sports world about the importance of going green?

Harvey: First of all, we’re a convener. So every year, we convene people who are actors in this space, [from] people who run stadiums and arenas to people who work in front offices at teams or leagues to vendors who participate in compostable food projects [and] sustainably made textiles. So we convene the industry, and that in and of itself provides value to people who are active in this area. Beyond that, we work individually with members and share case studies and make them available. Pretty much soup to nuts what you can do to address any one of a variety of areas. On top of that, there are webinars every month that do a deeper dive into each one of these areas and provide educational material.