Mary Harvey, the First CEO of the Centre for Sport and Human Rights

Mary Harvey, the First CEO of the Centre for Sport and Human Rights 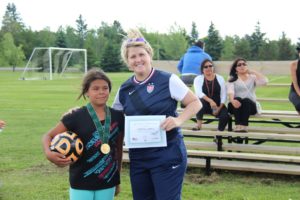 The former US national goalkeeper, who formulated the human rights strategy for the United 2026 bid, becomes the centre’s inaugural chief executive.

Whenever the awarding of a major sports event results in a large infrastructure project, allegations of human rights abuses seem to surface. During the early stages of its preparations to hosts the FIFA World Cup, Qatar was dogged by claims that migrant workers were living in appalling conditions, having their salaries delayed or not paid at all (an allegation backed up by a damning Amnesty International report in 2016).

A large-scale labour reform process adopted since has improved the situation, but there’s a recognition that keeping tabs on human rights during the whole event preparation process, throughout the whole supply chain, is incredibly challenging for sports organisations and organising committees.

Understanding the state of play, the Institute for Human Rights and Business (IHRB) established the Centre for Sport and Human Rights. And last week, during the organisation’s Sporting Chance Forum in Paris, it unveiled former US football international Mary Harvey as its inaugural chief executive.

Who is Mary Harvey?

Credited for devising and putting together the human rights strategy for the successful United 2026 bid (the US, Canada and Mexico’s bid to host the FIFA World Cup), Harvey appears to be the natural choice for the Centre for Sport and Human Rights.

The United 2026 strategy is based on United Nations Guiding Principles on Business and Human Rights, and was lauded for its detailed scale and scope. It commits the organising committee to obligations related to equality of opportunity and inclusivity, child safeguarding, freedom of expression, labour rights, land and housing rights, international travel and movement, privacy rights, and security.