Yes, Brent Suter is a Milwaukee Brewers pitcher. But for a little while on Tuesday, he was also a yellow perch.

He was playing a game at American Family Field with local students, who were also representing different animals and organisms in the food web and learning about who eats what, why that’s important and the impact of plastics.

“To see the looks on the kids’ faces, learning about the food chains and plastics and what we can do about it, it warms my heart,” said Suter, a longtime sustainability advocate.

This spring, the Brewers, the EarthEcho International nonprofit and Racine-headquartered SC Johnson teamed up to create the “Waste-Free Crew,” an educational initiative that gives local educators ways to teach students about environmentally friendly practices, according to a news release.

More than 4,000 students in fourth through sixth grades from 55 schools in the Milwaukee, Racine and Kenosha areas participated in the inaugural program. This year’s lessons focused on plastics and were delivered through EarthEcho Academy. 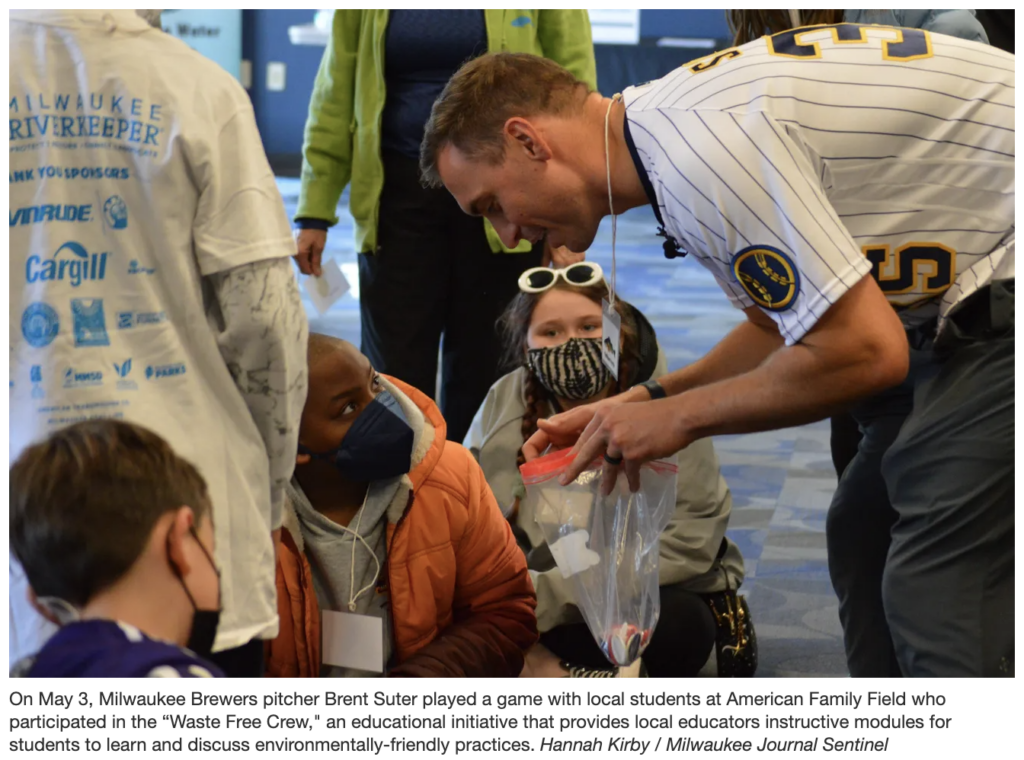 After completing the program, which ran from World Water Day through Earth Day, hundreds of kids visited the ballpark Tuesday to participate in interactive workshops and activities with about 16 community organizations that complemented what they had learned in their classrooms.

“We did all kinds of really hands-on exercises for the kids so they can get their heads around and make relevant for them what conservation is and what sustainability is,” said Alan VanderMolen, SC Johnson chief communications officer.

“I think it’s helping them make more connections to what they’re seeing now in their own lives,” said Emily Useman, a fifth grade teacher from Evergreen Elementary in Waterford.

EarthEcho founder Philippe Cousteau Jr., an explorer and advocate, told the students that spending time with them is “the most exciting work” he gets to do. He started the organization in honor of his father, Philippe Cousteau Sr., and grandfather, explorer Jacques Cousteau.

“We have a saying at EarthEcho: ‘It’s not that you can make a difference. It’s that everything you do makes a difference,” he told the students. “The question you have to ask yourself is what kind of a difference do you want to make? And I know that every single one of you here wants to be the positive difference, wants to make the world a better place. And that you can.”

“I just want to encourage you to be ambassadors for change, be people who want to go out and make the world a better place and do everything in your life as a selfless act and try to maybe make future generations have a planet that’s very healthy,” he said. 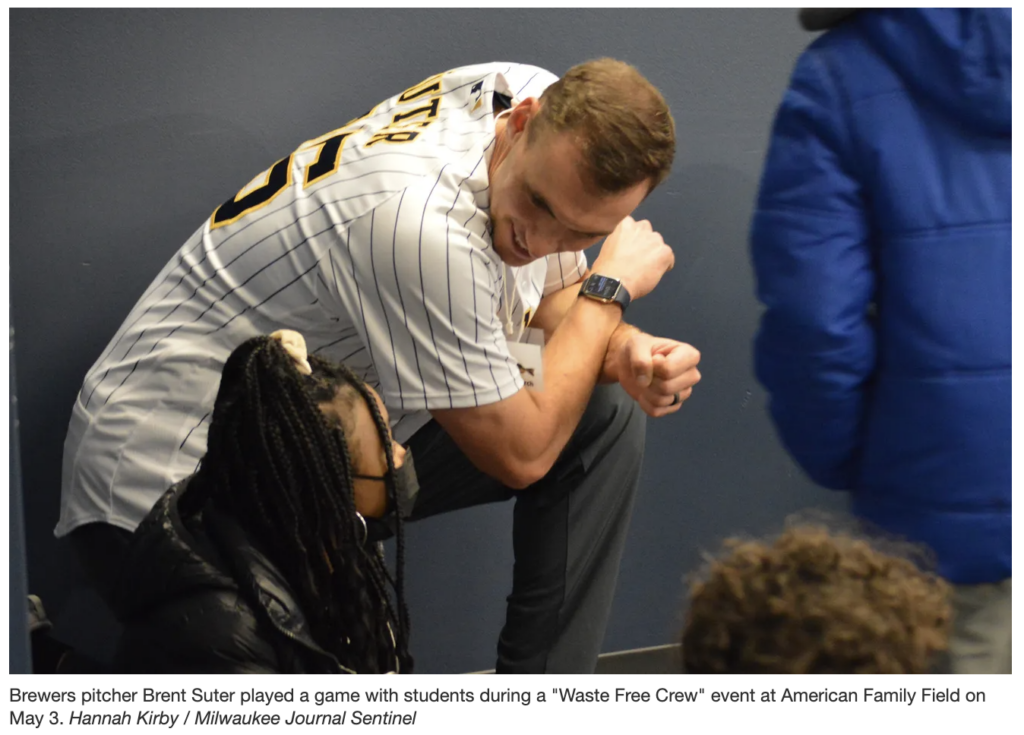 The “Waste-Free Crew” program hits home for Suter, who has an environmental science degree from Harvard.

Environmental issues have been on Suter’s heart “in a big way” since 2006 after seeing the documentary “An Inconvenient Truth,” which follows Al Gore’s campaign to raise awareness of global warming. Suter said it “smacked me upside the head” and motivated him to make a difference.

Suter doesn’t buy paper towels or napkins, frequents farmers markets to buy food that hasn’t been packaged, has a garden in his basement and has volunteered for cleanup projects, according to a 2020 Journal Sentinel report. He’s also worked with Nature Conservancy, Players for the Planet and EcoAthletes.

SC Johnson, the Brewers and Suter have also launched the Brewers Sustainability Council, an advisory board to review, discuss and implement best sustainability practices at the ballpark, a news release said.

For the second year, SC Johnson is turning plastic cups used at the ballpark into packaging for Scrubbing Bubbles, VanderMolen said.