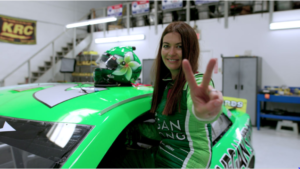 Eco-athletes became more of a thing in 2018 — and that’s a very good thing, according to Lew Blaustein, who writes about the intersection of sports and the environment for GreenSportsBlog. “I spoke to more eco-athletes in 2018 than in any other year since starting GreenSportsBlog in 2013,” he says. This year, he named racecar driver Leilani Münter as the best green sports story of the year. Here he explains how Münter’s steadfast dedication to environmental issues is paying off.

Given the dire climate news coming out of recent UN and U.S. government reports, the world needs this year’s eco-athlete “thing” to become a wave in 2019. But that is for another day.

There are three great reasons why Leilani Münter, the “vegan, hippy chick with a race car,” my pick for the Best Green-Sports Story of 2018. Münter…

The thing is, no one would have blamed Münter if she had decided to give up her career as a driver in NASCAR’s ARCA Racing Series before this year.