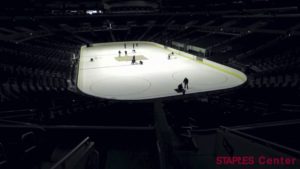 The Los Angeles Kings have formed a partnership with the BluEco Technology Group. The purpose of the relationship is to introduce special environmental technology into more arenas and public facilities.

The new environmental technology is BluEco Liquid Crystalline Turbex. This revolutionary management system helps produce pure water and clean indoor air. There is also an economic benefit to the technology because there is a reduction in energy costs.

Overall comfort is expected to improve as well. As players adjust to the new technology, there is a possibility that the overall performance could be enhanced as the ice is clearer, harder, more dense and has less impurities. Staples Center meanwhile used the BluEco Liquid Crystalline Turbex as part of a pilot project for the 2017-18 National Hockey League season.

The environmental technology is part of the Kings’ and NHL’s mandate to promote environmentalism, conservation and sustainability. The Anschutz Entertainment Group, which owns one half of the Los Angeles Kings, has promoted environmental initiatives in the past, and are strong supporters of the BluEco Technology Group. The LA Galaxy, who are completely owned by AEG, won the Environmental Innovator of the Year Award at the Green Sports Alliance’s Game Changer Awards in Sacramento on June 28, 2017 for their efforts in saving water, conserving energy and reducing pollution.