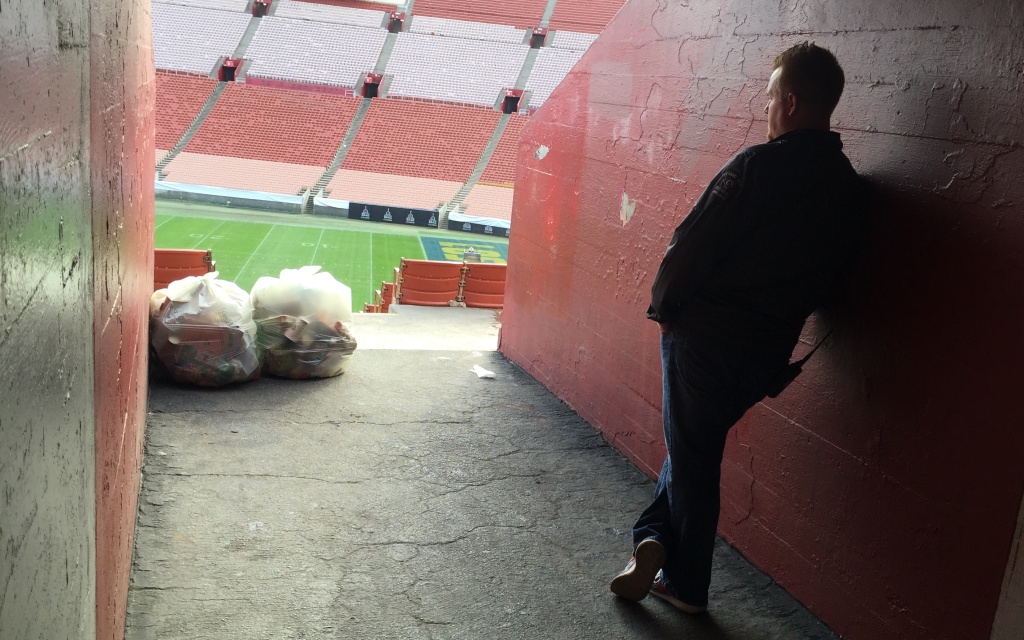 An official at the LA Memorial Coliseum says they have reached a milestone: zero waste after football games. FRANK STOLTZE/ KPCC

Officials from the Los Angeles Memorial Coliseum say the stadium is now considered a “zero waste” venue – more than 90 percent of the trash generated during football games is recycled or composted.

The achievement is rare in the world of both professional and college football, said Director of Operations Brian Grant, who was hired to launch the program three years ago.

Only a handful of stadiums have achieved the same goal, including venues that host the Philadelphia Eagles and University of Colorado, he added.

Coliseum officials realized they had reached “zero-waste” status after the USC game on Nov. 26 and the Rams game on Dec. 12. Nearly everything from beer cans to half-eaten hotdogs did not go to landfills.

“It’s been a long time coming, but it’s also been a long road,” Grant said. “Going from zero percent diversion [to landfills] to zero percent waste in two years is incredibly fast for a program this big.”

Grant came from the University of Minnesota, where he put together a recycling and composting program for the school’s stadium, which seats 50,000. He wanted to do the same in L.A. USC did too. The university took over management from the Coliseum in 2013.

Grant, who is employed by USC, said he worked with the school’s sustainability department to come up with a plan. They worked with their trash contractor, vendors and employees to make sure more products could be recycled or composted, like the plates used to serve food.

“Compostable materials go to a farm where they can be turned into soil additives and other things,” Grant said. “So we have a fiber-based plate now.”

Other shifts were more basic. Grant made sure the cans and bottles thrown in the stadium’s blue recycling bins were actually being recycled, something that was overlooked before.

The result: the 16 tons of waste produced at Rams and Trojans games doesn’t get dumped in landfills.

Read the full story and listen to the audio from the story here.