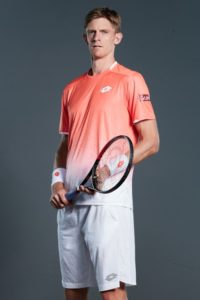 Kevin Anderson, the sixth-ranked men’s tennis player in the world, recently showed himself to be passionate about the plastic ocean waste issue in Jon Wertheim’s SI.com tennis mailbag column. GreenSportsBlog reached out to the Delray Beach, Florida-based South African to dig a bit deeper into his environmentalism and to get his take on climate change. Before heading out to Southern California for the Indian Wells tournament that is now underway, Anderson took a few minutes to answer our questions.

GreenSportsBlog: Kevin, when did you become an environmentalist and what got you into it?

Kevin Anderson: Well, Lew, a part of me has always been very mindful about how my life impacts the environment. Last year I watched a documentary called “A Plastic Ocean” and it really opened my eyes.

GSB: That is a must-watch film from 2016. Journalist Craig Leeson joined forces with retired free diver¹ Tanya Streeter and an international team of scientists and researchers to document the the scale of the plastic ocean waste pollution problems, and offered potential real world solutions.

Kevin: It definitely encouraged me to see what I could improve upon in my daily life and — as a tennis player — what athletes, tournaments and the organizations we are associated with could do better to make a change.

GSB: What environmental initiatives have you led or joined?

Kevin: I’m a huge supporter of the “Skip the Straw” campaign in Delray Beach, Florida. Hopefully that new rule will be approved, which means restaurants in the city will only give patrons plastic straws when requested. Living in close proximity to the Atlantic Ocean makes this initiative very important for our city and I hope more residents will continue to adopt practices using less plastic in their lives.

GSB: Good news: According to Boca News Now, the Delray Beach City Commission just passed the ordinance that will ban plastic straws. It will take effect January 1, 2020. How have your colleagues/competitors reacted to your leadership on environmental issues? Who have joined you?

Kevin: Many of my fellow players see the importance of reducing the use of plastics. Dominic Thiem of Austria is one who I’ve discussed this; he has an organization he supports…

GSB: …Thiem, the eighth ranked player in the world, is involved with 4Ocean, a nonprofit founded by two surfers that removes plastics from the oceans and other waterways. It sustains itself by selling bracelets made from that waste. 4Ocean reports that, in just two years, they and their teams of fishermen and others, have removed over 4 million pounds of trash from the oceans and coastlines.

Kevin: I know Dominic is very passionate about it. Overall, the players have been very supportive in helping me encourage the ATP Tour and tournaments to create more plastic-reducing initiatives and make it possible for us players to lead more environmentally-friendly lives.

GSB: Widening the lens beyond plastic ocean waste, what are your thoughts on climate change, its human causality, and how elite athletes can engage on the issue? I ask this question mindful of the severe water crisis in Cape Town in your home country of South Africa.

Kevin: I’ve definitely become more in tune with the climate change topic and it’s something I’m continually educating myself on. I think education is one of the most important parts when it comes to environmental issues, so I look forward to learning more.

GSB: Do you discuss climate change with your competitors/colleagues in the locker room, on the tour? If so, what have those conversations been like?

Kevin: Currently our most engaged topic relating to the environment is reducing our use of single-use plastics and encouraging recycling.

GSB: Athletes have been, with some notable exceptions, relatively quiet on climate change, although that is starting to change. Why do you think that is? What might change that?

Kevin: I know in tennis, we are all extremely focused on our training, fitness, matches, travel arrangements, etc. This takes up a large portion of our time because tennis is 24/7. But I do think in moments of downtime, we can focus on learning more. Again, education is key, and then perhaps athletes will feel more comfortable coming forward with their opinions.