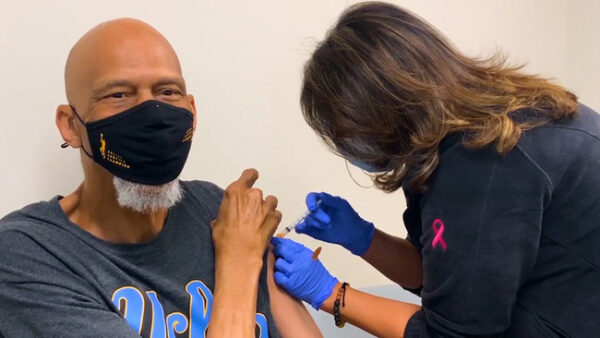 The NBA’s leading all-time scorer has taped a message that will be aired Monday during broadcasts of games on the MLK Jr. holiday.

Kareem Abdul-Jabbar has revealed that he received the COVID-19 vaccine and is encouraging others to consider doing the same.

The Basketball Hall of Famer and NBA’s leading all-time scorer has taped a short message that will be aired beginning Monday during broadcasts of games played on the Martin Luther King Jr. Day holiday. The video shows Abdul-Jabbar receiving a vaccine.

“We have to find new ways to keep each other safe,” he said.

Abdul-Jabbar is 73, within the guidance from the Centers for Disease Control and Prevention about vaccine eligibility.

Those guidelines suggest that priority for receiving the vaccine should go to health care personnel, those living in long-term care facilities, front-line essential workers, those over the age of 65 and people “with underlying medical conditions” that increase their vulnerability to COVID-19.

NBA Commissioner Adam Silver has said the league will ensure that its players and teams wait until their turn comes to be vaccinated and will not “jump the line.”

The Los Angeles Clippers announced late last week that the LA Forum will serve as a large-scale vaccination site starting Tuesday, and Detroit forward Blake Griffin is part of a commission in Michigan trying to stress the safety and effectiveness of the vaccine.