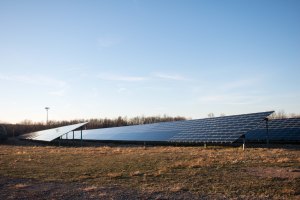 Solar panels cover an abandoned former parking lot at Pocono Raceway. In August of 2010, it became the first racing facility to rely on solar power to run 100% of its facility. (Photo credit: Pocono Raceway)

GreenSportsBlog: The story of how Pocono Raceway became one of the greenest sports venues in the US has to be a fascinating one! So Brandon, how did it begin?

Brandon Igdalsky: It started with my grandparents, Doctors Joe and Rose Mattioli. They were professionals in Philadelphia—Joe, also simply known as “Doc”, was a dentist, Rose a podiatrist. They invested in the Poconos back then and, in so doing, got involved as investors in the raceway. By the mid 60s, they’d taken control.

GSB: A dentist and a podiatrist running a raceway. Who’da thunk it? Did your mom or dad take over?

BI: Nope. It mostly skipped a generation— My mother and my aunt are both involved in various aspects of the company and also serve on our board. But my brother Nick, now the EVP and Chief Operating Officer, and I got the bug from a young age, working there during the summers. In fact I remember clearly the date—June 17, 1989. My grandpa said “you’re working with us.” I was 13. So I picked garbage, worked in the sewer plant, cutting the grass…

GSB: …All of the glamour jobs!

GSB: So did you go straight into the business after high school or college?

BI: No, I tried a bunch of things, especially in the restaurant business, working both in Philly and the Poconos. But, ultimately, I came back to the raceway and to work with my grandfather.

GSB: Were you an auto racing fan growing up?

BI: Oh yeah, I loved auto racing, especially from being around it up close.

GSB: Where did the green piece of the story come in?

BI: Again, it goes back to when I was a kid. We had recycling bins, going way back in our neighborhood growing up.

GSB: …Pocono Raceway was ahead of the green game even back in the 70s!

BI: More like the 90’s. Of course I didn’t look at it that way; I just thought recycling bins were cool. And then, in my late teens, early 20s, I became more of an environmentalist. It came from being out in the Poconos. It’s just so beautiful and, well, green. And I’m an avid fisherman. So, put it altogether, I felt that we absolutely had to keep the Poconos pristine and healthy. There was no other option.