In its 10th year, Ralphie’s Green Stampede is Closer to Zero Waste Than Ever

In its 10th year, Ralphie’s Green Stampede is Closer to Zero Waste Than Ever 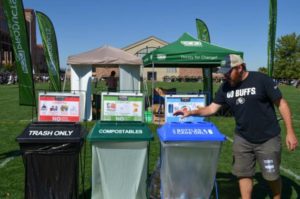 Fans attending home games at Folsom Field are used to composting and recycling at tailgates and inside the stadium. They may not realize with these simple acts they are playing a part in being “the greenest athletics program—college or pro—in the country,” said Dave Newport, CU Environmental Center director.

When Ralphie’s Green Stampede was founded in 2008, it made Folsom Field the first Zero Waste football stadium in the nation. This Homecoming weekend, the program is celebrating a decade of supporting Buffs fans in making sustainable choices inside and outside the stadium, while also continuing to pioneer a sustainable athletics program.

It was thanks to the energy and efforts of students and the receptivity of CU Athletics leadership that the partnerships that underpin Ralphie’s Green Stampede were born, according to John Galvin, director of stadium operations who works to keep Folsom Field “green” year-round.

“A successful Zero Waste program requires a team effort and numerous hours of collaboration from all partners. The staff, students and volunteers that support this project are incredibly passionate and are the reason I stay motivated in my position,” said Angela Gilbert, Zero Waste events manager, who works closely with Galvin and CU Athletics.

Sorting all of the waste after a game takes four to six hours overall, but is a critical part of the Zero Waste process.

“If the compost we send out is too contaminated, it gets rejected and has to go into the landfill,” Gilbert said.

By noon the day after the game, Folsom Field looks just as it did before game day.