How Your Favorite Sports Teams are Greening the Future of Sports

How Your Favorite Sports Teams are Greening the Future of Sports 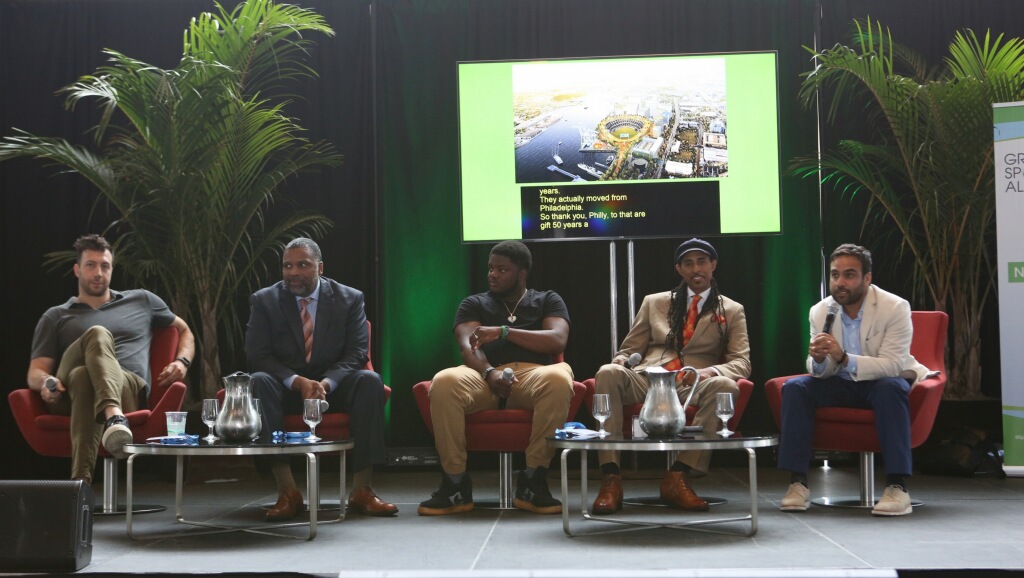 As you pick up your Impossible Cheesesteak at the next Phillies game, did you ever consider if there are any chemicals in the wax paper underneath the sandwich? Whether your college basketball stadium is composting? Or even if there’s recycling at stadiums?

With millions in their fan bases, sports can be a place of celebration where we watch our cities come together and athletes break records… or occasionally, win the Super Bowl. But the sports venues also have an important decision: whether to set an environmental precedent or to create a giant environmental footprint for a few hour event.

That’s where the Green Sports Alliance comes in to provide education and resources to the industry. Self-defined as “the environmentally-focused trade organization that convenes stakeholders from around the sporting world (teams, leagues, conferences, venues, corporate partners, governmental agencies, athletes, and fans) to promote healthy, sustainable communities where we live and play,” according to their website.

Green Sports Alliance hosted about 500 attendees to its annual Summit in Philadelphia, at Lincoln Financial Field on June 19th and 20th.

A local lens in the conversation about Environmental Justice & Sports

One of the first sessions at the Summit was Beyond the Ballpark: The Role of Sports in Environmental Justice Reform, moderated by Kunal Merchant of Lotus Advisory. The incredible panel included:

Jerome Shabazz provided an overview of the Overbrook Center (which he explained during our tour last summer), emphasized the role of bringing the community to the table when making decisions. When we’re designing spaces and programming in communities, how do we include the community in design? How does social justice play a role?

Shabazz challenged attendees to think beyond environmental justice to environmental freedom. As Shabazz mentioned, “People should have a right to breathe, move and live in their local communities.”

The first step to being a leader is the decision to become one.

After watching his teammates on the field in Houston for four years, former NFL Eagles Player Connor Barwin wanted to make a change. While growing up, he understood the importance of playgrounds and urban spaces. As he biked down 20th Street, he noticed the dilapidated courts in South Philadelphia. Although he initially hoped he could donate $40,000 to repave the court and playground, he ended up with a $750K master plan 18 to revamp the entire area. Smith playground now has courts, green stormwater infrastucutre, a community garden and rain garden.

Working with partnerships, Make the World Better is now working on its fourth site, a $14 million project in Southwest Philly.

His biggest advice for those who want to make a difference? According to Barwin, “Get involved in your neighborhood.” Also, make your intentions known. As Barwin shared, “Your voice goes a long way in changing policy, especially environmental justice policy.”

How can we talk about the urgency around climate change with a clock ticking? We need to incorporate more storytelling with our urgency. According to Santiago Ali, “Facts will move minds, stories move hearts.”

Brad Molotsky, Partner at Duane Morris, discussed strategies to save energy, cut plastic packaging, and save money – at a procurement panel.

But one of his prime examples was how collaborating with similar organizations can make sustainability efforts easier and cheaper. “The Phillies, Sixers, Eagles and the Flyers are all within spitting distance of each other. They were thinking about wasted food coming out of these stadiums and each had separate trash contracts. So they got together for a stronger solution.”

What did Philadelphia sports teams do? They got together financially and collaborated on a composting solution, taking food waste to a farm a short distance from Philadelphia.

What can we learn from this? What other businesses or families could we “collaborate” with on our sustainability initiatives, to get away from straws, start composting or other ideas?

Young Entrepreneur Monika Dharia created a greener poncho that actually removes carbon dioxide from the atmosphere. Instead of using petroleum ponchos to keep fans dry, Monika’s EcoRain poncho is made from sugar-based ethylene and sequesters 3.09 kilograms per kilogram of raw material.

EcoLite is cutting Teflon-like chemicals from your (Impossible) burger’s wax paper at the stadium. Fluorochemicals that add a nonstick coating can end up anywhere including those food-grade papers, popcorn bags, shoes and many other places including fast food restaurant paper wrappers. (AND they’re still legal in PA!) EcoLite includes safe lines, and confirmed none of their Philly versions has the chemicals. There were a couple of products that contained PFAS, but are phasing out all PFAS chemicals from their products by 2021.