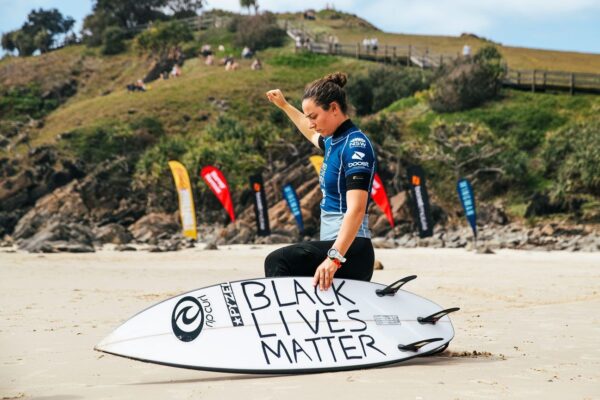 TYLER WRIGHT STANDS alone near the water’s edge at Cabarita Beach in New South Wales, Australia, a navy competitor’s jersey pulled snugly over her wetsuit. It’s September, early spring in the Southern Hemisphere, and the offshore breeze is humid and brisk as the world’s best surfers, including Wright, compete for the first time since the start of the COVID-19 pandemic.

Wright steadies her breathing as an air horn signals the start of her heat. Her competitors are already out in the lineup, but the two-time world champion doesn’t move to join them. Instead, she starts the timer on her watch and bends to kneel in the sand. She props her white tri-fin against her left knee and raises her right fist high above her head. The wind blows the wisps of hair curling around her face, but Wright holds silent and still. TV cameras broadcasting the Tweed Coast Pro pull back from her face: On the bottom of her surfboard, in black lettering that stretches from rail to rail, Wright has written, “BLACK LIVES MATTER.”

For nearly eight minutes — each second representing one of 439 First Nations people killed in police custody in Australia since 1991 — Wright’s heart races as she kneels, alone and apart from her peers.

“I get chills just picturing it,” says Selema Masekela, a longtime action sports broadcaster and one of the most high-profile Black men in surfing. “My friend, Chelsea, a Black surfer from Santa Cruz, texted me, ‘Are you watching the surf contest? You won’t believe what Tyler is doing for us.’ I am not kidding, I cried. I never thought I would see any top surfer be brave enough to take a stand.”

With roughly 12 minutes remaining in her heat, Wright stops the timer, tucks her board under her arm and runs into the Pacific. As she stands, someone on the beach hoots in support. Another voice cheers, “Woohoo! Yeah, Ty!”

The backlash online is almost as instant.

“Who are her sponsors? They should drop her.”

Many were surprised that Wright was the first pro surfer to break with the pack and thrust her fist into the sky. She wasn’t always outspoken and bold. She spent her first six years on tour afraid to say much at all, a powerful surfer who wanted to be known for her bravery in the water and as a blank page on land. But after a childhood tamping down her emotions, a relationship that changed the way she saw herself and a mysterious illness that nearly ended her career, the 26-year-old returned to professional surfing in 2019 with a lot to say.

“Being out of the sport made me look at surfing with honest eyes,” Wright says. “I realized if I’m coming back, I am going to show up with who I am as a human first. Surfing needs people who are going to get into boardrooms and have hard conversations. I’m asking for equality for women, equality for the LGBTQ+ community, equality for Black and brown and indigenous people. I honestly don’t care about winning more world titles. But I know what gets me in the room.”