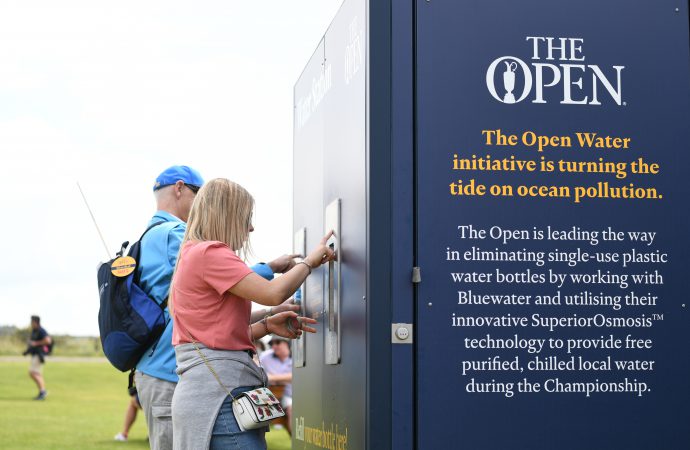 The connection between golf’s oldest major and the coast made tackling marine pollution ‘a very fitting topic’. Philip Russell, the governing body’s assistant director of sustainability, explains how it was done

Golf is facing a fight for its future. Increased rainfall, extreme weather events, coastal erosion and rising sea levels are either resulting in extended periods of course closure or posing an existential threat. In the Game Changer report published by the Climate Coalition last year, R&A director of sustainability Steve Isaac was quoted as saying: “Golf is impacted by climate change more than most other sports.”

The good news is that The R&A is doing something about it. The world governing body for the sport (apart from in the US and Mexico) has made sustainability a key part of its operations through advocacy, education, raising awareness, water use, land use and protecting biodiversity.

Earlier this year, it published Golf Course 2030 – a “roadmap” to help the golf industry address these environmental challenges. As the organiser of The Open – the oldest major and a tournament that always occurs on a coastal course – The R&A is also keenly aware of the damage plastic is doing to marine life in the waters around some of golf’s most iconic venues. That’s why tackling ocean plastic was at the centrepiece of its GreenLinks sustainability strategy for the 2019 edition of competition at Royal Portrush in Northern Ireland.

“Public awareness around the environmental issues caused by single-use plastics has started gaining momentum. It is a poignant issue for The R&A given our very special and close relationship with the coastal system,” Philip Russell, The R&A’s assistant director of sustainability, tells The Sustainability Report. “The ocean is the backdrop to The Open Championship and we thought the particular problem posed by single-use plastics and the pollution of the marine environment was a fitting topic for us to address.”

“We knew it was very important to find a new, innovative solution that would also help continue raising awareness of the issue,” Russell adds.

Tournament organisers decided that on-site water refill stations and providing refillable bottles was the route to take. After doing some research the decision was made to collaborate with Swedish firm Bluewater, which is building a solid reputation in the sports industry after installing purified water dispensers and manufacturing stainless steel reusable bottles for The Ocean Race during its 2017/18 season.

The companies worked together for a period of six months to design a delivery model called The Open Water Initiative. This included the installation of 18 water stations on-site at the championship and one at a camping village that The Open runs as an affordable accommodation solution.

Water dispensing units – that provide purified drinking water – were distributed around the main spectator areas, such as the fan village, and close to catering outlets and the merchandise pavilion. The Open also handed out 5,000 free branded, BPA-free stainless steel refillable bottles to spectators and offered the attendees who missed out the opportunity to purchase their own for £4.50.

The bottle on the left is The Open refillable bottle, 5,000 of which were given to spectators during the event. On the right is the Players’ Edition

Getting the price point below £5 was important, says Russell, as a major part of the activation was to engender behaviour change in spectators. The fact that no single-use plastic water bottles would be provided on-site was also communicated early to ticket holders, who were encouraged to bring their own bottles and use the water points for free.

“We sourced a refillable bottle of the quality that aligned with The Open’s reputation as a premium event and something people would take home with them,” Russell explains. “We wanted a quality product that people would continue to use, not throw away after The Open as that would defeat the purpose of the initiative.

“These bottles are really beautiful and a powerful behaviour change reminder. You can take the bottle to work, take it to the gym – basically take it wherever you go.”

Every player, including eventual winner Shane Lowry, was presented with a Players’ Edition bottle that was premium in quality, with double-walled insulation and their names laser-engraved on the product. Caddies were given the same bottles (minus the engraved name). If the players required hydration during play, they were offered water in 100% recyclable cans that could be transferred into their bottle. These cans were stocked on every tee.

As a result of the collaboration, The Open avoided using approximately 100,000 single-use plastic bottles.

The organisers also handed out 5,000 free refillable branded bottles to  spectators. And although others were sold for drinking purposes and as souvenirs, Russell describe the endeavor as an “investment” not a project that saved or made The R&A any money.

“To deliver this project and make it work to its full potential, we had to invest in it,” he adds. “That is a reflection of our commitment to the topic, our position as governing body and our status as the organiser of one of the majors. We wanted to do it well and be real change leaders.”

In addition, The R&A carried out spectator surveys during the event, asking a number of questions about the water stations to analyse fan perception. The governing body also worked with a creative video agency to produce a short film linking The Open project to marine conservation in order to “form that connection in people’s minds”.

“It’s taken a huge amount of time to work through this,” says Russell. “Single-use plastic water bottles are very straight-forward as a product you can use virtually anywhere, so when you take those away you have to think very carefully about how it will work from many perspectives.

“It took nearly every department in our organisation to make this a reality; staging, communications, marketing, retail. Now we’ve taken this initial step we need to continue using this model going forward. We will also consider how we can continue to expand and improve it. We’ll look at the learnings from this past Championship – about where water stations are located and how communications are structured, for example – and move on from there.”