How the 2019 ESPY Awards Focused on Sustainability, Inclusivity—and the USWNT

How the 2019 ESPY Awards Focused on Sustainability, Inclusivity—and the USWNT

ESPN’s 27th annual award show and its surrounding events were highlighted by eco-friendly decor, inspirational messaging, discussions of race and politics, and big wins for women. 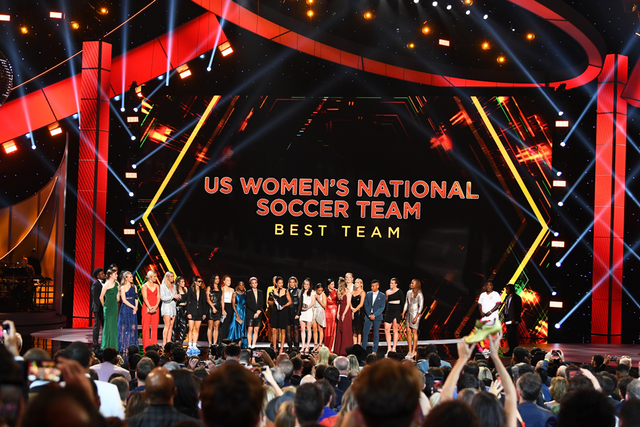 LOS ANGELES—It’s no surprise that the United States women’s national soccer team dominated this year’s ESPY Awards, held on July 10 at the Microsoft Theatre. Coming off a World Cup win just three days earlier—and a ticker-tape parade across the country in New York the same day as the award show—the women capped it off with a Best Team trophy. “This is the second-best trophy we won this week,” joked player Alex Morgan, who also took home the prize for Best Female Athlete.

The focus on the women’s team continued the trends from last year’s award show, which had its first woman host and a courage award for female survivors of former USA Gymnastics doctor Larry Nassar’s sexual abuse. Chants of “equal pay” followed the USWNT win, referencing the movement to pay female athletes the same as their male counterpoints. In another highlight, U.C.L.A. gymnast Katelyn Ohashi gave a memorable speech on body shaming.

According to longtime executive producer Maura Mandt, the political and cultural moments the ESPYs have become known for are never planned. “The athletes are the biggest part of what this show has become,” she told the Hollywood Reporter last week. “It is because of their vulnerability in their speeches, and what they have done. We build a stage, quite literally, and offer them a platform … But I don’t think the production or the producers can take credit for any kind of impact that the athletes’ stories we cover have on the world. We are only as good as the stories we have to tell.”

The themes of inclusivity and inspiration continued to the red carpet, where sponsor Nike asked athletes to write down the reasons sports matter to them. Similarly, an ESPN-hosted town hall the day of the show saw athletes discussing the role societal issues, including race, play in the sports community.

Throughout the week, ESPN also showcased its longtime commitment to sustainability, working with Kilowatt Events to create a red carpet made from recyclable materials and using drought-resistant succulents in place of flowers. The official post-party, produced by 15/40 Productions, continued that trend: All service ware was made from compostable materials, and a 70-foot tree—which served as a focal point of the event—was later repurposed as landscaping.

The ABC broadcast generated 3.9 million viewers, on par with last year’s show. Scroll down for a look inside the live telecast, the pre- and post-parties, and more.