How Sports Can Shift Attitudes Toward Global Sustainability

How Sports Can Shift Attitudes Toward Global Sustainability

The sports greening movement is arguably the most diverse, visible and fastest-growing initiative in the environmental movement. Ecologically enhancing the way sports venues are operated, and using sports media platforms to promote environmental messages to sports fans, holds the potential to influence the behavior of billions of people and a global supply chain that touches every industry.

Sports’ greening is bringing together nontraditional allies to tackle intractable ecological issues. And it offers teams, leagues and venues opportunities to save money, develop new sponsorships, and enhance their brand with fans, most of whom express a concern about environmental issues. According to a poll produced for the Green Sports Alliance, 80 percent of sports fans express concern for the environment, and 58 percent expect teams and leagues to be environmentally responsible. 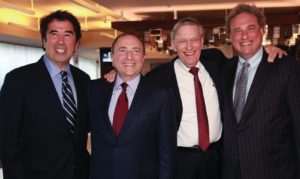 Recently, at a Green Sports Alliance event at Yankee Stadium, which honored the Bronx Bombers for their environmental work, three professional sports league leaders made a rare joint appearance: NHL Commissioner Gary Bettman, MLS Commissioner Don Garber and former MLB Commissioner Bud Selig. They showed up to express their respective league’s commitment to environmental stewardship. And there is good reason for them to do so: The ecological problems we face are more urgent and frightening than ever. Decades of frustrating efforts urging the world’s major greenhouse gas polluters to significantly cut their emissions is failing, suggesting that our traditional approach to controlling climate-changing emissions may be fundamentally flawed. Indeed, scientists tell us that if we continue our current policies as they are, there is a high probability that global temperatures will eventually rise by at least six degrees, which would end human life on planet Earth.

There is no law in North America requiring sports leagues, teams or venues carry out the good environmental work they are doing. And because there is no law, too many companies and most governments have not taken the significant steps needed to slow global warming. This is why the sports industry’s work to protect the environment is so important. And what the sports industry does is noticed, and it is noticed globally.

The growth of the Green Sports Alliance, a not-for-profit organization mobilizing the sports industry around the issue of environmental protection, reflects the growth of the sports greening movement its founders helped to cultivate and lead: In less than five years the GSA has emerged as the most influential environmental organization in the sports industry. GSA membership includes many hundreds of professional and collegiate teams and venues from 20 sports leagues across 14 countries. GSA members span the sports industry, from the Yankees to the Red Sox, from the Staples Center to the Barclays Center, from AEG to IMG, from the Super Bowl to the French Open, from the Winter Classic to the World Series, from the Euro Cup to NBA Green Week, surfers and sailors, snow sports athletes and Formula E owners, GSA members everywhere are incorporating ecologically intelligent practices into their operations.

North American league members of the Green Sports Alliance include MLB, MLS, Major League Lacrosse, NASCAR, the NHL, NBA, U.S. Tennis Association, Pac-12 Conference and NCAA. GSA affiliates have been established in Europe and Australia, working with UEFA, European Professional Club Rugby, the French Ministry of Sports, International Academy of Sport Science and Technology, Lord’s Cricket Ground and other sports federations. Plans are underway to create affiliates in the U.K., Brazil and elsewhere. GSA corporate members are similarly influential and diverse and include ESPN, AEG, UPS, IMG, BASF, Wells Fargo, Kimberly-Clark, Skanska, HOK, Aramark, Nature-Works, Legends, Delos, and many other companies prominent throughout the sports supply chain. As a result of the GSA’s collaboration with so many sports industry leaders, the Green Sports Alliance now advises more leagues, teams and venues than any organization in the world about the benefits of environmental stewardship, while reaching millions of fans about environmentally smarter behavior.

Each year the Green Sports Alliance convenes the GSA Summit, the world’s largest and most influential gathering for the sports community to unite around sustainability. This year the GSA Summit will take place this week in Chicago, including a reception at Soldier Field. Growing from its humble beginning less than five years ago, the GSA Summit will bring together almost 800 sports industry stakeholders to share information about ecologically better practices.

What kind of planet will we leave to our children and the thousands of generations to come after them? Fossil fuel use, industrial agriculture, deforestation, water scarcity, exponential population growth, ocean acidification, billions of tons of wastes produced every year — these are big issues. Are they resolvable? I don’t know. But I do know that we have to try to do something about them. Few sectors can be as influential as the sports industry in leading the way towards ecological sustainability. Sports is arguably the most culturally unifying and visible sector in the world, with billions of fans and a market exceeding $1.3 trillion annually.

There is hope. The good news is that leaders throughout the sports industry, from commissioners on down, have reduced millions of pounds of carbon emissions, expanded food donations and composting, are incorporating ecologically healthy food menus, developed recycling programs, installed energy efficient technologies and use safer chemicals.

Can the sports industry save the planet on its own? No, it cannot. But the sports industry can move the market and shift cultural attitudes toward the more sustainable practices we urgently need to adopt if life on Earth is to continue. And the good news is that it is doing so.