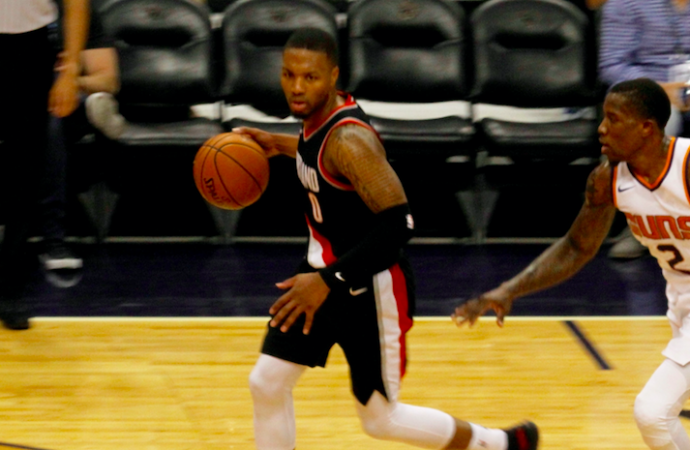 Over the last decade, NBA franchise Portland Trail Blazers has carved out a reputation as one of the most sustainable professional sports teams in the growing US green sports landscape. In 2010, it’s Rose Garden Arena (also known as the Moda Center) home became the first professional sports venue to achieve LEED Gold certification.

Recycling bins are a consistent feature in the facility, while the team does its utmost to encourage those travelling to games to use public transit to reduce their negative environmental impact. Indeed, there are four ‘Live Greener’ principles that the franchise attempts to live by in order to enhance its reputation in this area: lower and offset environmental impact; vow to form aligned partnerships; engage in community philanthropy, and; inspire behaviour change in fans.

To achieve the latter, Portland Trail Blazers teamed up with nonprofit EcoChallenge and corporate partner Daimler to engage with fans in a deeper way by setting them the Liver Greener Challenge: to select one or many sustainable behaviours during Earth Month (April 2019) around food, waste, energy and transport, and to use a real-time platform to document their progress.

“It was about making fans aware of the work we’re doing in sustainability and making sure they’re part of the journey,” says Octavia Chambers, social responsibility impact manager for Portland Trail Blazers. “One of our goals is to facilitate behaviour change with our fans, and so this platform provided a space for us to do that.”

She tells The Sustainability Report: “We do a survey every year and we know sustainability is really important to our fans. We live in Portland, which is a green space. But we also found that we weren’t doing a lot to engage them and they weren’t necessarily aware of what we were doing.”

Portland-based EcoChallenge.org is a platform that gives members of the public the chance to participate in sustainable lifestyle challenges throughout the year, with the ambition of facilitating long-term positive behaviour change.

The company was approached by Portland Trail Blazers in 2018 with its own challenge: to produce an engaging custom-designed platform allowing fans to take up challenges and track their progress throughout the month of April.

“We decided to do the challenge in September 2018 and made it happen in April 2019,” says Liz Zavodsky, EcoChallenge.org director of organizational development. “During that time we spent a lot of time with the team, learning about what was important for them, such as: what actions did they want fans to take? What opportunities did they give fans during games to be sustainable?

“To get the fan experience right, we met with the marketing and community relations teams to discover how they wanted to be represented. The actions they want their fans to take represents the values they have.”

Five challenge categories were created – waste, food, water, energy and transport – with easy, medium and difficult challenges in each category based on the time, skill, knowledge and cost needed to achieve those objectives. The breadth of challenges was about two things: aligning with the goals of the Trail Blazers, and to make the challenge accessible for its diverse fanbase, meeting people where they were at in their sustainability journey.

“We wanted to make sure that the challenge actually reflected what our goals were,” Chambers adds. “The EcoChallenge.org platform has developed a lot of challenges already for other organisations, as well as its own annual challenges, so we used a couple that had already been devised while creating a few specific to our organisation.”

EcoChallenge.org customised its platform template with the colours and fonts associated with the Trail Blazers, as well as a video incorporated on the homepage.

Corporate partner Daimler North America, which already invests in the Trail Blazers’ sustainability programme (alongside Friends of Trees, the car manufacturer plants three trees for every three-pointer the team scores throughout the season), got involved in championing the project.

Once the platform was built and tested, the Liver Greener Challenge started to be promoted.

“We had a Live Greener Game on 3 April where we highlighted the challenge and encouraged folks to sign up,” says Chambers. “We did Facebook, Twitter and Instagram posts just to make fans aware that we were doing this challenge and that we wanted them to be part of it.”

Fans were able to sign up throughout the month and use the platform to log their progress. For example, if they committed to going meatless on Monday, Tuesday and Wednesday, they had to log their achievement. Those engaging regularly received credits, giving them the chance to win prizes, such as signed jerseys, balls and cards.

Before the Live Green challenge began, Chambers had a target of 1,000 sign ups. Her objective was achieved with 1,099 people taking part altogether. That group of 1,099 people selected 6,389 actions, logging into the platform 34,770 times throughout the month to chart their achievements.

“It was great to see that some of the participants weren’t actually Trail Blazers fans in the sense that they don’t go to games all the time,” Chambers says. “Making the connection between sustainability and our brand helped us appeal to new fans. Sustainability is important to them and now they see that it’s also important to the Trail Blazers. We have that brand connection now.”

Zavodsky adds: “Teams and venues can only do so much; we need behaviour change from fans related to waste diversion and energy use. We wanted to see what we could get fans to commit to, share what the Trail Blazers were doing and help people align choices and behaviours when they go to games.

“We hope people will continue these sustainable actions and integrate their fan experience into life in general.”