How Ohio State Is Tackling Clean Energy And Zero Waste

How Ohio State Is Tackling Clean Energy And Zero Waste

Ohio State is one of the gold standard programs in college football. With a national championship last year, the team is the closest thing to a unifying force in sports in the state. And with more than 106,000 fans filling the Horseshoe every home game, with more than 500,000 living alumni and with millions following the Buckeyes on TV, radio and online, the impact of Ohio State football is massive. 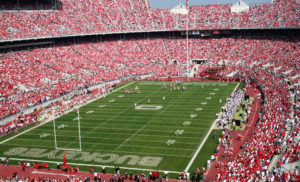 Given the huge fan base and audience, the potential impacts of Ohio State’s zero waste home football games — the school is in the process of completing its third straight zero waste season — are also massive. Zero waste events are defined as diverting at least 90 percent of waste from the landfill via recycling, composting or repurposing. The Buckeyes diverted an incredible 95.2 percent of in-stadium waste in 2014.