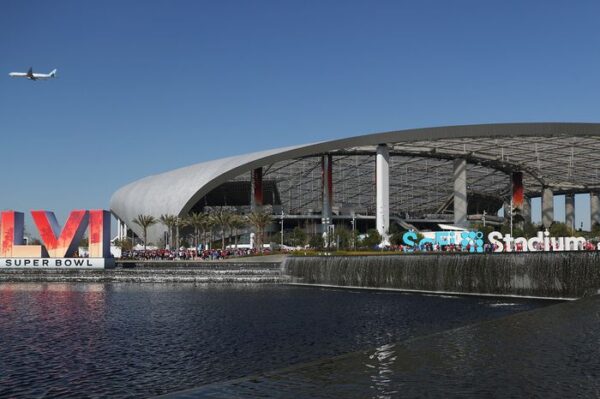 Missing from this year’s Super Bowl lineup: plastic straws and cups, for starters.

Ditching much of its disposable plastic is just one step that SoFi Stadium near Los Angeles — home to this year’s NFL championship on Sunday, and a notorious car-dependent city — is taking as major sporting events aim to sync up with changing consumer habits.

Beyond the host stadium’s green practices, it’s a big push for electric vehicles in the always-scrutinized TV commercials, many already revealed, and cleaner and greener product awareness, like a hydrogen-powered beer truck, that will set this Super Bowl apart.

No doubt, the big game is a massive consumer indulgence for a singular event — calling for carbon-intensive long-distance travel for out-of-state attendees, and risking food waste at home parties.

According to Waste Management, stadiums and arenas used by the NFL, MLB, NBA and NHL create roughly 35,000 tons of carbon emissions each year from spectators alone.

Yet, members of the nonprofit Green Sports Alliance, which pulls from all professional sports, hope that the high profile of the Super Bowl helps push environmentally-friendly action in football and beyond.

“Sports have an enormous influence on our culture as millions of fans follow the lead of their favorite teams’ sustainability choices, from energy and water use to drinking straws,” said Roger McClendon, executive director of GSA.

After all, in 2021, approximately 57.5 million viewers in the U.S. watched digital live sports content at least once per month. And, in pre-pandemic times, roughly 150 million individuals attended professional sporting events in person each year, across the five major sports leagues, says a group tracking sports-related travel.

Here are some of Super Bowl LVI’s “green” highlights

SoFi itself — lots of parking, smart design: SoFi Stadium, newly built in suburban Inglewood and home to both the Los Angeles Rams and Chargers, cost about $5.8 billion, the mayor once said at a city council meeting, which makes it the biggest football stadium ever created and the most expensive in the U.S. In total, it measures 3.1 million–square-feet. Unlike most stadiums, it was entirely privately financed.

SoFi includes 17 large parking lots, and it wasn’t immediately clear on the facility’s site how many cars that accommodates. SoFi is using a shuttle system for the Super Bowl.

The hosts will try to jam in about 100,000 in-person spectators; stretching its regular capacity.

Tens of thousands of visitors will contribute to this, along with the energy, trash and greenhouse gas emissions.

Specific to the L.A. game, the NFL is partnering with a veterans group that helps restore the Pacific’s kelp forests. And the NFL will buy 5,600 trees — 100 trees for each Super Bowl to date — to be planted in the Angeles and Los Padres National Forests damaged by wildfires.

Biodegradable official straws and recycled cups: As the NFL season kicked off in September, SoFi Stadium began offering unique concession ware meant to help curb the growing global plastic pollution crisis, especially in the ocean. SoFi began using a compostable and biodegradable drinking straw and cocktail stirrer made from canola oil from the WinCup “phade” line of products. And the stadium started using recyclable aluminum cups, made by Ball, for beer and cocktails. The practice continues for Sunday’s game.

Plus, Mercedes-Benz Stadium, home of the NFL’s Atlanta Falcons, the Patriots’ Gillette Stadium in New England, and the 2021 PGA Championship in Kiawah Island, South Carolina, use these ocean-sensitive straws as well.

Food recovery and donations: SoFi has a list of sustainability aims. Among them: Recovering and donating unused food from its corporate offices and facilities. It’s a trend that has spread across a U.S. that outranks the world in food waste, including by this Georgia-based entrepreneur who turned a home-based effort to feed the unhoused into a major fleet of vans delivering executive dining hall leftovers to shelters in need, in real time.

Nikola is partnering with BYD Motors, which will step in with battery-powered delivery trucks for the shorter-run deliveries of carb-free Bud Light NEXT, to bars and stores for viewing parties.

Anheuser-Busch is the biggest potential buyer of Nikola trucks, having reserved hundreds of hydrogen-powered models.  The brewer has a global net-zero ambition and commitment to reducing carbon emissions across its U.S. value chain by 25% by 2025. 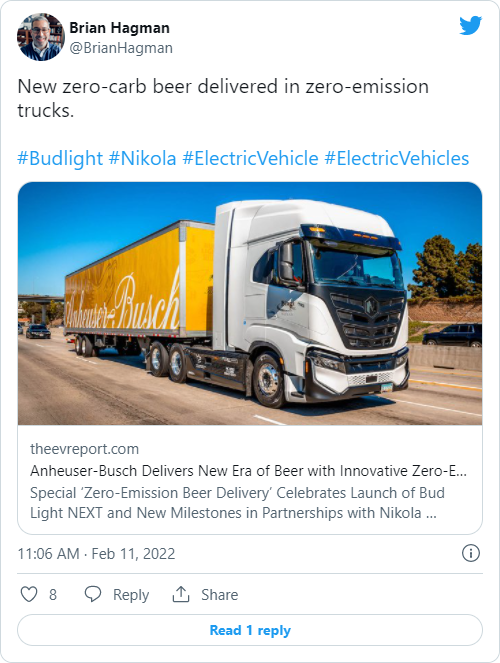