How College Sports Spurred Mississippi to Seriously Reconsider Its Flag

How College Sports Spurred Mississippi to Seriously Reconsider Its Flag 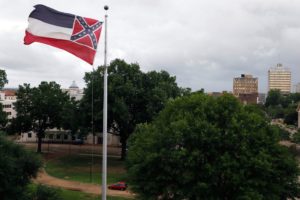 Time and again, debate over the state’s flag and its Confederate battle imagery faded away. Then college sports leaders threatened to take away some of the biggest games.

It was just before 9 a.m. last Friday when Philip Gunn, the speaker of the Mississippi House of Representatives, received a phone call from a lobbyist for Mississippi State University.

The National Collegiate Athletic Association, the lobbyist said, might soon take a punitive stand against the state flag, the last in the nation with the Confederate battle emblem, just as the Southeastern Conference had done the night before.

Soon after the warning, the N.C.A.A. announced that it had toughened its longstanding opposition to the battle emblem and would more aggressively penalize any state that sanctioned it. In Jackson, the Mississippi capital, Gunn instantly recognized that the state’s seemingly intractable debate over its 126-year-old flag would shift.

“It hits home with a lot of people because a lot of people follow sports in Mississippi,” Gunn, a Republican who was a walk-on football player at Baylor, said in an interview on Friday. “It was kind of a shot across the bow to say, ‘Wake up, people: There are real consequences here that are going to happen if you continue to maintain this flag.’”

Lawmakers could vote as soon as Saturday on a measure to change the flag, and officials said that the margin of any vote, whenever it comes, would likely be close, particularly in the Senate. But regardless of the outcome, it is clear that the college sports industry has helped shape the state’s deliberations, accelerating and elevating a debate that many thought would fade away this year, just as it had in one legislative session after another.

For the flag’s critics, the threats that the N.C.A.A. and the SEC would withhold hosting privileges for lucrative national and conference tournaments became tangible examples of the economic perils of preserving the flag. And in a state that cherishes college baseball and football, the warnings may have eased the way for other influential institutions to condemn the flag with less isolation and, perhaps, fewer repercussions.

“It gives you the ultimate cover; it’s not unlike the Catholic Church in Italy — it’s a powerful force,” said Stuart Stevens, a Republican strategist who grew up in Mississippi and wrote “The Last Season: A Father, a Son, and a Lifetime of College Football.”

College sports executives have a record of sporadic intervention in charged statehouse debates. In 2016, for instance, the N.C.A.A. and the Atlantic Coast Conference opposed a North Carolina measure that sought to curb the rights of transgender people. And nearly two decades ago, the N.C.A.A. began to keep some of its championship competitions away from states that offered formal havens for the battle flag.

Then this month, with the nation in renewed turmoil over endemic injustice, college sports officials faced new questions, especially from student-athletes, about the Confederate flag.

In early June, a student asked Greg Sankey, the SEC commissioner, what more the conference had done to address racial disparities since 2015, when Sankey criticized the battle flag after a white supremacist murdered nine black churchgoers in Charleston, S.C. And in Indianapolis, where N.C.A.A. leaders had periodically considered whether to strengthen the association’s stand against the battle flag, officials watched the demonstrations sweeping the country and weighed how to respond.

Last Thursday morning, during a call with the leaders of his conference’s 14 universities, including Mississippi and Mississippi State, Sankey told campus officials of his planned warning.

“I came from the perspective that it was the right statement to make,” Sankey said. “I didn’t move with the expectation that other organizations would follow.”

But N.C.A.A. officials, who had just been urged by current and former student-athletes in Mississippi to take a more forceful approach to the flag, were planning a similar discussion for Friday morning, when the association’s Board of Governors was scheduled to convene. In that meeting, the board unanimously agreed to abandon a crucial exception in its policy on Confederate symbolism: that states, regardless of their ties to the battle flag, could hold championships if their teams’ performances earned them a sufficiently high seeding or ranking.

Mississippi, the N.C.A.A. noted tartly in its announcement, was the only state that stood to be penalized under the rule change.

“The moment focused everyone’s attention on all of those things that could and should be done to increase inclusiveness and make sure we’re being attentive to issues of equality and social justice,” Mark Emmert, the N.C.A.A. president, said in an interview.

In Mississippi, where Oxford and Starkville hosted games in the Division I baseball tournament last year, the N.C.A.A.’s rewritten policy was quickly judged as potentially costly. Keith Carter, the athletic director at Mississippi, which lowered the flag in 2015, said his school generally netted at least $200,000 when it hosted part of the baseball tournament. The hospitality industry in Oxford, with its population of about 28,000, also benefited from tens of thousands of visitors.

The ultimatums, Carter said, “opened up a conversation that maybe people were a little hesitant to get involved in.”

Indeed, discussions in Mississippi intensified in subsequent days, and one group after another, including the state Baptist Convention and the Mississippi Association of Realtors, spoke out against the flag.

The warnings from college sports figures may not have shifted opinions, but they helped prompt people to let “their views be known,” Gunn said.

In a striking display on Thursday, many of the state’s leading coaches — many of them rivals under more ordinary circumstances — walked the Capitol’s corridors, lobbying lawmakers who were often alumni and fans.

“This is a moment in our society for us to reassess values and to do the right thing by removing this symbol of hatred,” said Nikki McCray-Penson, the women’s basketball coach at Mississippi State.

Surveying the fast-changing landscape from afar on Friday, Emmert, a political scientist by training, suggested that he saw echoes of history in Mississippi.

This week, though, Carter appeared frustrated that outsiders ever had to speak up, that they had the need to threaten punishments.

“You hate,” he said, “that it has to come to that for your state to take notice.”