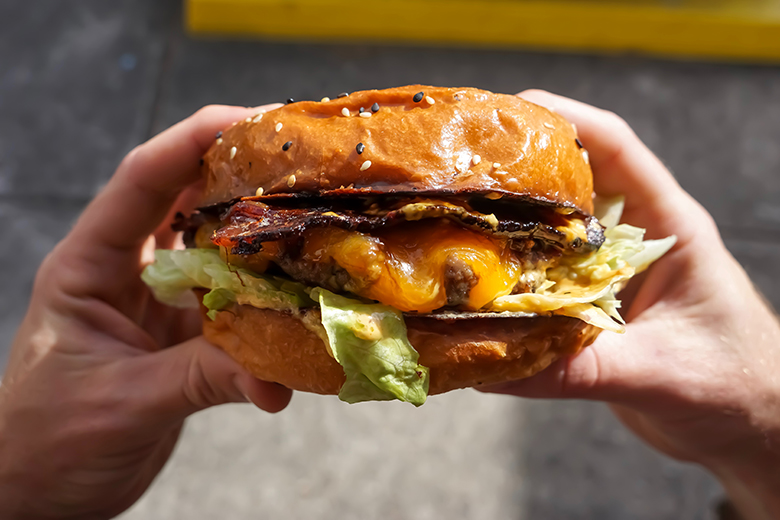 Family meal—the term used in the restaurant industry for a shift meal shared by staff—generally involves servers and line cooks eating communally around a cramped back table before the start of service.

“Whatever doesn’t get used for concessions, we use,” says Aaron La Greca, executive chef of Levy Restaurants, the company that oversees the stadium’s food programs. “Any burgers that come back, we’ll grind them up and make meat sauce or chili or something like that. We do carving stations—chicken carving, that could turn into pulled chicken for tacos.”

Sporting event attendees alone generate around 39 million pounds of trash per year in the U.S.

In 2018, the team repurposed 20 tons of food that would otherwise have been thrown out, according to Barclays’ director of arena operations Rohan Bhasin.

And the approach is just one example of how the arena is attempting to reduce the massive amounts of food and food packaging waste produced at an average of 225 events (including games, concerts and other entertainment) per year, as part of a broader slate of sustainability initiatives.

Stadiums, unsurprisingly, have a deep environmental footprint, from the materials and emissions involved in construction to vehicular air pollution to waste generated. One EPA statistic cited in a study on the environmental impact of sports stadiums estimated that sporting event attendees alone generate around 39 million pounds of trash per year in the U.S.

With that in mind, venues across the country have been working to implement strategies to reduce their impact. Six hundred sports teams and venues now belong to the Green Sports Alliance. The sports and entertainment company AEG now operates AEG 1EARTH, which tracks environmental performance metrics for more than 80 sports and entertainment venues, teams and festivals.

Barclays is one of them. The stadium itself is LEED Silver Certified, and Bhasin has been working on other initiatives, like switching to more efficient LED lighting and operating a green roof. But waste from food and food packaging presents the most obvious challenge and opportunity.

In addition to saving unused food from the landfill via family meal, La Greca said kitchen staff is able to reduce waste by cross-utilizing ingredients in shared commissary kitchens. (In other words, Graze Smokehouse and Calexico’s menus might look very different to an attendee, but they prep their food in the same place.)

Barclays stadium is LEED Silver Certified, and director of arena operations Rohan Bhasin has been working on other initiatives, like switching to more efficient LED lighting and operating a green roof. But waste from food and food packaging presents the most obvious challenge and opportunity. Photo courtesy of Barclays

And in addition to recycling, Bhasin began testing a composting program in 2017. In 2018, the stadium started putting it into action by having staff collect leftover food from the suite levels (where food is often placed out buffet-style) at the end of events. Instead of throwing it into the trash, it gets separated into an organic compactor. “Last year, we had 50 tons of food waste composted,” Bhasin reported. The commissary kitchens also house two ORCA food digesters, where kitchen staff can dispose of food scraps that then get broken down into liquid that flows into drains, keeping additional scraps out of the landfill.

The containers the food and beverages are served in are another project. “I think every item we have right now except for the red Nathan’s stick in the hot dog is compostable,” Bhasin says, but those materials are currently getting thrown in the garbage. Eventually, he wants to change that, but getting fans to properly separate their waste into trash, recycling and compost during events will be a bigger challenge. “That’s what we’re working toward,” he said. “That’s the next step.”

It seems slightly ambitious, but then again, Barclays also eliminated plastic straws from its food service operations last October. (It offers paper straws upon request.) At a venue that churns out portable soft drinks, one might expect a tricky transition, but at a recent Nets game, the change seemed to have simply settled in. After a woman ordered a Coke at Junior’s, she looked down quizzically at the lid for a brief moment and then picked it up and started sipping it like a coffee.