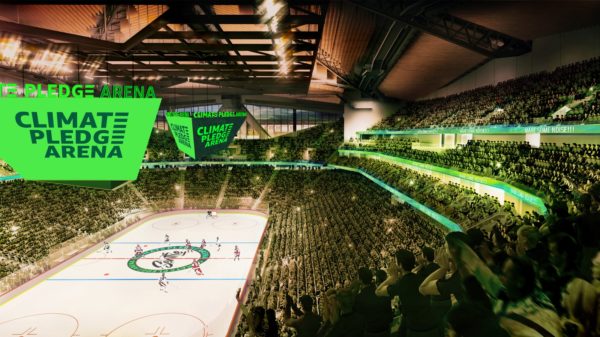 In a joint venture with an entertainment investment firm and sports team owners, Climate Pledge Arena aims to be the world’s first stadium to achieve a net Zero Carbon certification

At the end of July, the NBA will resume its season from within a remote “bubble” at Disney World in Orlando. Shortly before that, Major League Baseball will begin a 60-game season played in stadiums filled only by cardboard cutouts. Suffice to say, most sports fans aren’t thinking about the in-person experience at the moment. But once the puck drops on the 2021–22 NHL season, they (hopefully) may be thinking less about COVID-19 and more about climate change and sustainable stadium design.

This shift in thinking would be due in large part to Climate Pledge Arena, the future home of Seattle’s NHL expansion team and the WNBA’s Seattle Storm. Named after the Amazon-led initiative pushing corporate signatories to achieve net-zero carbon emissions by 2040, the revamped venue formerly known as KeyArena hopes to raise awareness about its namesake issue while setting a new standard in green, sustainable design.

Rather than simply joining the ranks of the 300-plus sports venues around the world that had achieved some level of LEED certification from the U.S. Green Building Council as of 2019, the joint venture between Amazon, entertainment investment firm Oak View Group, and NHL Seattle’s ownership aims to be the first arena in the world to achieve a Net Zero Carbon certification from the nonprofit International Living Future Institute (ILFI). This would eclipse the LEED Platinum certification first earned by Atlanta’s Mercedes-Benz Stadium in 2017 and set a new gold standard.

Hitting that ambitious target starts with the use of sustainable construction practices and materials and continues through game-day operations. Events at Climate Pledge Arena will be powered by 100% renewable electricity generated by on- and off-site solar panels, an effort further supplemented by forestry projects for carbon sequestration.

Keeping key operational components local will also help cut down on carbon. At least three quarters of the arena’s food, to be served in compostable containers, will be sourced from local farmers and producers, with viable unused food diverted to local community food programs. And for the first time ever, rainwater that falls on the arena’s iconic roof—the main architectural holdover from the KeyArena days—will be collected in cisterns and treated so it can be turned into regulation-quality NHL ice. In short, Climate Pledge Arena will quite literally embed sustainability into the game itself. 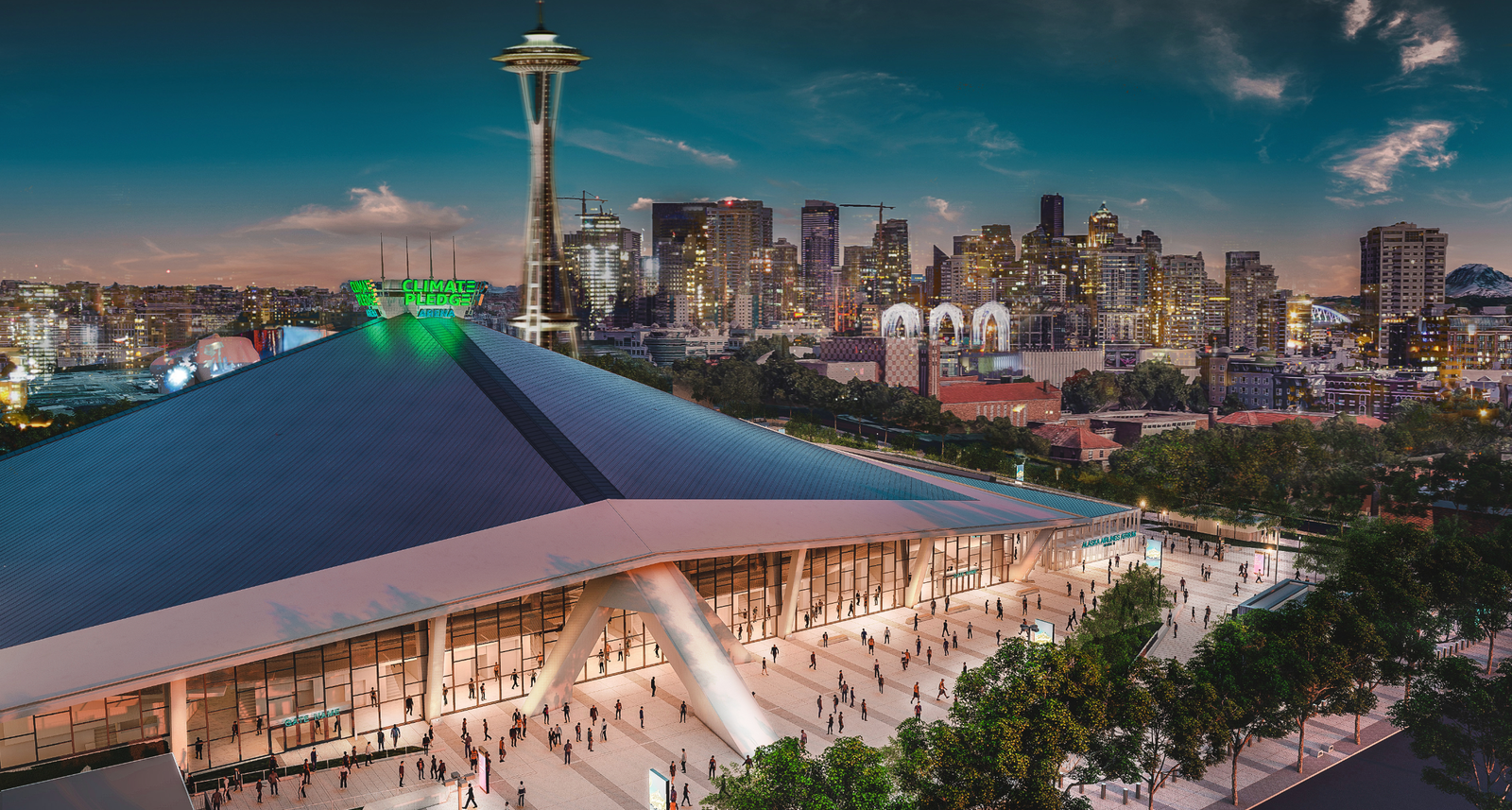 A rendering shows how the redesign of the new eco-friendly stadium could appear when completed. Photo courtesy of Amazon

These efforts to create a stadium that viably operates without any fossil fuels could have a far-reaching impact. “The beautiful thing that this proposes to do is show that you can build a green billion-dollar project, and you can do really transformative things,” says McLennan Design CEO Jason McLennan, who consulted on the project. “Thousands and thousands of people are going to come into contact with this building, and they’re going to see the sustainability element and the message of the Climate Pledge at a scale that just isn’t done.”

Though Amazon’s vaunted $2 billion Climate Pledge Fund is earmarked for other earth-saving investments, the online retail monolith views its involvement with the arena it named “as a long-term partnership.” Beyond purchasing the naming rights, allegedly valued between $300 and $400 million, to advance awareness of its Climate Pledge, Amazon will leverage its existing climate data science capabilities to model the arena’s climate impact.

Climate Pledge Arena will share sustainability performance data on a quarterly basis, incorporating data points around energy and water use, as well as how much of the arena’s waste is diverted from landfills. Because NHL Seattle and Seattle Storm tickets will double as free public transit passes, these quarterly disclosures will even track the number of fans using public transportation, including the refurbished Seattle Center Monorail, to get to games.

“We’re excited about [the partnership] because it speaks to the public engagement and transparency aspects of how we can hopefully inspire action not just at this arena, but beyond,” says Chris Roe, Amazon’s lead sustainability expert on the project. “We think we have a comprehensive viewpoint that the public can engage with about how their arena really is performing from a sustainability and climate perspective.”

The project’s holistic approach to green building will hopefully extend to the broader community as well. Amazon and Oak View Group have partnered to form the Climate Pledge Arena Sustainability Advisory Council, with a goal of supporting local community groups on environmental initiatives.

The Green Sports Alliance, an organization that advises nearly 400 teams and venues on the intersection between sustainability and sports, has praised the ambitious goals of Climate Pledge Arena. But as senior partnership manager Kristin Hanczor sees it, such partnerships are crucial to ensuring that the benefits of these climate efforts are distributed more equitably.

“For any venue, team, or business that commits to ambitious climate goals, it is critical that they make sure to effectively manage social and community impacts,” Hanczor says. “Environmental justice is a critical component to any sustainability plan, and we need to make sure climate efforts are both inclusive of people across demographics and do not have disproportionate negative impacts on certain communities.”

Work on Climate Pledge Arena is still about a year from being completed, and one of the two teams set to calling it their home still needs a team name. Time will ultimately tell if it successfully achieves Zero Carbon certification from the ILFI, and the arena’s sustainability performance data should be closely scrutinized to ensure its name truly is more than just a bit of slick PR maneuvering.

For now, though, Roe knows that Climate Pledge Arena has the potential to get sports fans thinking about an issue that doesn’t show up in highlight reels or box scores: “The fact that people will be talking about things like climate change on ESPN, we think that’s pretty exciting.”