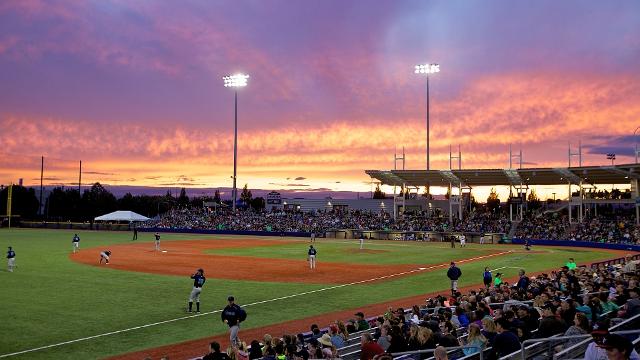 As a Minor League Baseball™ team on the outskirts of Portland, Oregon, sustainability and environmentally-friendly practices are second nature. The lifestyle in the Pacific Northwest is one of recycling, reusing and reducing, and the Hillsboro Hops do everything they can to contribute to the sustainability of their ballpark, surrounding communities and the state of Oregon.

Consider Ron Tonkin Field: the home of the Hops. The stadium was constructed in 2013 and is one of the most eco-friendly ballparks in the country. As the facility was being built, more than 57 tons of general construction debris was salvaged and recycled. An additional 77 tons of concrete and masonry were taken to a local facility to be crushed for structural fill. The foundation of the ballpark itself is based in sustainability.

Another key component of the Hops’ green initiative is the ballpark’s artificial turf field. The amount of water it takes to keep natural grass healthy, not just during the season, but also during the off-season, is enormous and is avoided altogether with our artificial turf. All bathrooms, showers and kitchens at the facility also use low-flow water conservation systems, to significantly reduce the amount of water used.

The building features recycling bins around the concourse, as well as receptacles for compost and landfill. Anyone who has been to a baseball game is aware of the amount of cans and plastic bottles that are used at the event, and it is important to provide an efficient means of disposal for those materials. Ron Tonkin Field also encourages fans to bring in reusable water bottles that can be filled up at any of the water fountains lining the concourses.

With thousands of people filling the stands at Ron Tonkin Field at every Hops home game, transportation is also an issue. The stadium faces the challenge of being outside the immediate proximity of a public transportation system. To resolve the issue, the Hops offer a complimentary, eco-friendly Hops shuttle to and from Ron Tonkin Field from the closest Tri-Met train stop. Fans and gameday employees use both the train and shuttle and help take cars off the road.

The communities of the Pacific Northwest are passionate about the environment, and it’s important for the local professional baseball team to reflect the practices of its community whenever possible. We wanted to construct a facility that would provide fun for our fans and citizens while also remaining in line with the core values of the local community. We’re proud of Ron Tonkin Field and the greening of our ballpark.