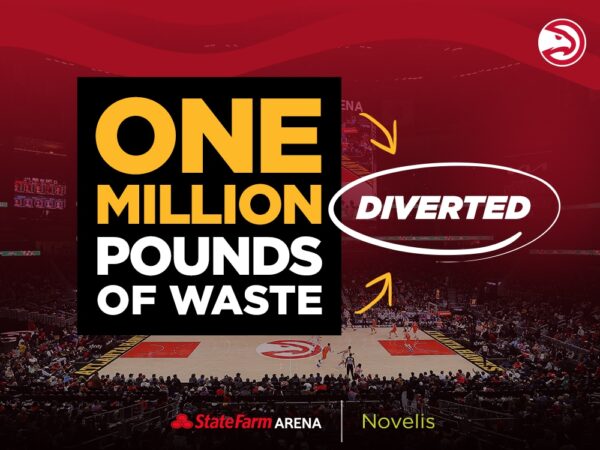 ATLANTA – Today, it was announced by the Atlanta Hawks and State Farm Arena that they have successfully diverted more than 1,033,716 pounds of waste from landfills throughout its 2021 slate of Hawks’ basketball games, concerts and ancillary events. Most notably, the award-winning venue prioritized changes in its operations and sustainability efforts to go from diverting nearly 10 percent of waste in 2019 to now diverting an average of more than 90 percent of waste on any given gameday or event day throughout the entire slate of events.

“As we continue our journey of becoming the first TRUE certified zero-waste venue in sports and live entertainment, diverting more than one million pounds in a calendar year is an incredible feat and brings us that much closer to our goal,” said Hawks and State Farm Arena Director of Sustainability and Operations Sofi Armenakian. “We are extremely proud of the efforts and our partners, Novelis, Levy and Pritchard, who play an important role in achieving such a milestone in 2021.”

State Farm Arena composted 365,290 pounds of materials, and recycled 165,623 pounds of bottles, cans, and food containers; 68,630 pounds of construction and demolition material (e.g., wood, stone, metal, insulation, carpet, marley, foamboard, etc.); and 122,125 pounds of cardboard. In addition, the venue has recycled 49,565 pounds of glass, 11,281 pounds of aluminum, and 3,194 pounds of plastic film; and recycled and donated 5,827 pounds of furniture and appliances. The Hawks have also donated 5,872 pounds of food (approximately 5,000 meals) and 3,576 pounds of old retail merchandise. Other materials were recycled, donated, composted and reused to bring the total to 1,033,716 pounds.

Since the summer of 2021, the Hawks and State Farm Arena have worked closely with Novelis, the world leader in aluminum rolling and recycling, who has continued to provide guidance and operational knowledge to organize, sort and recycle aluminum and other materials. The partnership has focused on promoting sustainability, responsible recycling and a circular economy.

“Achieving more than one million pounds diverted from landfills this quickly is awe inspiring,” said Novelis EVP & North American President Tom Boney. “We’re excited get more infinitely recyclable aluminum cups and cans into fans’ hands and further reinforce the value of recycling these products. Playing this role in the Atlanta Hawks and State Farm Arena’s sustainability journey is an honor for us. This is one of many reasons why Novelis is proud to call Atlanta home.”

The Hawks and State Farm Arena continue to lead the way in sustainable practices for sports and live event venues. At the end of last year, Novelis became the official aluminum recycling and proud sustainability partner on State Farm Arena’s journey to becoming a TRUE zero-waste venue. TRUE (Total Resource Use and Efficiency) is a standard set by Green Business Certification Inc. (GBCI), the world’s leading sustainability and health certification and credentialing body. In June of 2021, GCBI announced that Game 4 of the Atlanta Hawks’ first-round playoff series last May against the New York Knicks earned TRUE certification, marking the first time a sporting event has received the designation. The game was sold out with 16,458 fans in attendance.

To learn more about how the Atlanta Hawks and State Farm Arena are leading the way in sustainability efforts across the sports and entertainment industry, visit StateFarmArena.com/sustainability.