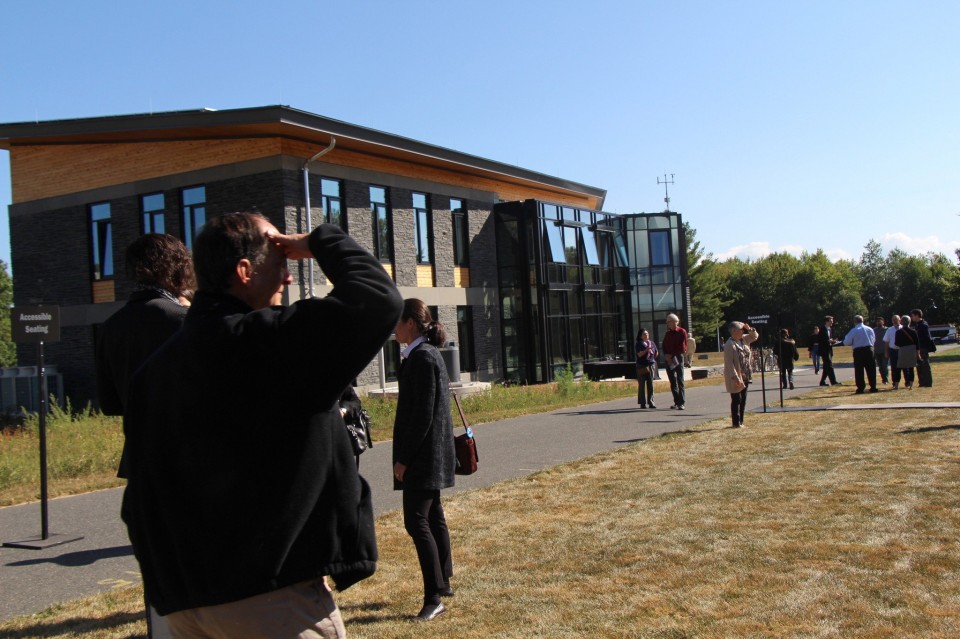 Some of the hundreds who gathered for dedication outside the Kern’s Center before dedication began. Diane Lederman/The Republican

Bill Kern came to Hampshire College as a student in the early days of the institution only after his father, Ralph W. Kern, gave him his blessing.

The New York real estate developer knew his son would thrive there, and he also knew about development. He told his son there was no need to reinvent the wheel when it came to building.

But Kern said, “Times are a changing. We have to reinvent the wheel.”

That new wheel is embodied in the new structure at Hampshire College that bears his father’s name. The family donated toward the $9 million construction of the R.W. Kern Center.

Bill Kern was one of nine people who spoke at the building’s dedication Friday, a ceremony that was part of a daylong symposium titled “What Buildings Should Do.”

The 17,000-square-foot Kern Center houses the offices of admissions and financial aid, classrooms, student social areas and a cafe. It was created to embody the college’s mission to foster positive change in the world, and to meet the Living Building Challenge. That means it is designed to generate its own electricity, treat its own waste and collect its own water — meeting a net-zero standard.

Bill Kern said the building “will be a prototype, a model” for other buildings to follow.

Hampshire College President Jonathan Lash said there is no reason to build any other type of building on a college campus. The questions he wanted to leave audience members with were, “Why not and how do we make this happen?”

Dayna Cunningham, a Hampshire parent and trustee, praised the college for providing a place for her son to thrive. Constructed out of non-toxic materials, she called the Kern Center “a love note to the environment.”

A Hampshire alum, Hirschberg said the building is an example “that challenges the myth that green means sacrifice.” He said it shows that a building can use fewer resources and reduce its carbon footprint.

“It’s a win-win-win,” he said, referring to the building’s economic, environmental and educational benefits. The building “is a living, breathing educational opportunity,” he said.

Hundreds attended the dedication, including many Amherst officials. Lash praised the town for its help in working with the college to create the building.

Carter spoke about the importance of self-gentrification, the concept of improving one’s own community instead of leaving it for developers to gentrify. She talked about the coffee shop, tech company and park she helped create in her South Bronx neighborhood.

Carter said it’s time “to stop arguing about the difference between equity and inequality. Let’s just get busy and change the lives of people in need.”