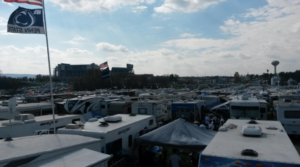 A village of RVs stretch out to the horizon in the tailgate area before a Penn State University football game in State College, PA. Someday, perhaps soon, a portion of those RVs will sport wind turbines on the roof (Photo credit: visitpennstate.com)

Wind-powered recreational vehicles (RVs) could become a thing at college and pro football games. Arizona State University and the Oakland A’s launch a sustainability partnership at Hohokam Stadium. And golf balls hit into the oceans, lakes and more are a hazard for wildlife and water cleanliness. All in all, it’s a busy mid-week GSB News & Notes column.

Drop in on the parking area of any SEC or Big Ten college football stadium on the Thursday before a big Saturday game and you will see dozens of RVs, filled with tailgaters, barbecuing, imbibing in adult beverages, playing touch football, watching TV and…promoting wind power?

OK, that last bit about wind power may be a stretch.

Or maybe not. According Michele Boyer, a retired writer and full-time RVer, mini wind turbines are now designed to be able to be mounted atop RVs.

Writing in the March 2nd issue of TripSavvy magazine, Boyer reports that Southwest Windpower, a subsidiary of Xzeres, a leader in the small wind turbine (45-80 feet high) market over the last 15 years, has gone even smaller, manufacturing a mini version that mounts on a large boat or RV.

The small size and rapidly declining cost has turned small wind systems into an economically viable option for RV owners, including, of course, those who tailgate. Many are now pairing small wind with small solar panel units to minimize the impacts of the intermittency problem — i.e. the sun doesn’t always shine and the wind doesn’t always blow.

Solar and wind costs have each dropped dramatically over the last decade, with wind the cheaper option in many cases. “The cost of small wind has gone below five cents per kilowatt hour (kWh), about half the cost of solar power,” noted Boyer. “Installation and initial investment for an RVer are significantly less for a wind generator than for equivalent power-capable solar panels.”

Boyer does point out that, in addition to its intermittency, there are some drawbacks for RVers, including noise and dangers from electrical storms.

That said, when I attend the Big Ten contest between the University of Iowa and Rutgers (the latter my alma mater) this September in Iowa City, I expect to see a windy, zip code-sized tailgate area, filled with RVs. And maybe a few will be topped by mini-wind turbines.

OAKLAND A’S MOVE TOWARDS ZERO-WASTE SPRING TRAINING, THANKS TO PARTNERSHIP WITH ARIZONA STATE

The Oakland A’s and Arizona State University’s School of Sustainability launched a partnership last month to help Hohokam Stadium in Mesa, Arizona move towards zero-waste during the 2019 spring training season. The goals are to increase operational efficiencies and improve the fan experience, all while moving Hohokam towards the 90 percent diversion rate threshold necessary to claim zero-waste status.

As part of the initiative, a group of 21 ASU students are analyzing Hohokam Stadium’s waste stream and operations to help the 10,500-seat ballpark become more sustainable during the six weeks of spring training. They are putting their detective caps on to find the most innovative, fan-friendly and cost-effective approaches that can increase recycling, reusing and composting. After the A’s ship out at the end of the month to begin the regular season, the students will produce a report that recommends the best ways to approach waste minimization for spring training 2020 and beyond.

“The A’s are proud to call Mesa our home away from home, and we want to do our part to promote sustainability and minimize our environmental impact at Hohokam Stadium,” said A’s president Dave Kaval. “We are excited to team up with Arizona State University on this initiative and learn how to reach our goal of becoming a zero waste facility.”