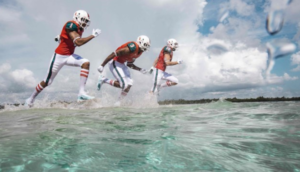 The University of Miami Hurricanes will take the field Sunday at LSU in eco-friendly alternate uniforms, thanks to a partnership with Adidas and Parley for the Oceans (Photo credit: Environmental Leader)

As our US-based GreenSportsBlog readers head out for the Labor Day weekend, we’re offering up a GSB News & Notes for your end-of-summer reading pleasure. The University of Miami (FL) Hurricanes will open their 2018 football season against LSU in Arlington, TX wearing eco-conscious uniforms from Adidas and Parley for the Oceans. But should the Hurricanes also be taking on climate change, given Miami’s vulnerability to it? About 60 miles southwest of Baton Rouge, the UL-Lafayette is embarking on a journey to host Louisiana’s first Zero-Waste football games. And, MLS’ LA Galaxy and the Stub Hub Center add to the growing number of teams and venues eliminating plastic straws.

UNIVERSITY OF MIAMI HURRICANES DON ECO-FRIENDLY UNIFORMS; WHEN WILL THEY TAKE ON CLIMATE CHANGE?

When the University of Miami Hurricanes take the field Sunday night in their nationally televised season opener against LSU at AT&T Stadium in Arlington, TX, they will do so wearing new, alternate uniforms made from repurposed and upcycled materials, including plastic ocean waste. The uniforms are the result of a partnership between Miami, Adidas and Parley For The Oceans.

While the Hurricanes are the first American football team to partner with Parley for the Oceans and Adidas, they are following in the footsteps of European club soccer giants Bayern Munich and Real Madrid in wearing the eco-friendly alternate uniforms.

More than 70 percent of the special-edition uniform is fashioned from regenerated Econyl yarn (made by Aquafil of Trento, Italy), a raw material transformed from fishing nets and other nylon waste intercepted in marine environments, and from Parley Ocean Plastic, which also comes from waste that was intercepted from beaches and coastal communities. The result is a “durable, yet breathable fabric that is optimal for Adidas performance apparel,” according to a statement from the Hurricanes. Players will also wear cleats and gloves featuring recycled materials. The statement claims the cleats are the first-ever styles of eco-conscious footwear to be debuted on-field for NCAA football competition.

“Our players and staff are excited to wear the new adidas Parley jerseys and gear for our season opener,” Hurricanes coach Mark Richt said in a statement. “We’re also excited that Adidas and Parley are teaming up with UM to help promote sustainability around the world.”