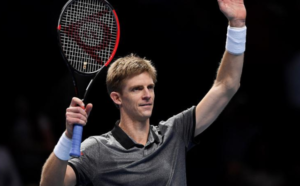 South Africa’s Kevin Anderson instantly became one of the world’s most well-known eco-athletes on Wednesday when he took on the plastic ocean waste issue — and tennis’ contribution to it — in Jon Wertheim’s popular SI.com mailbag column.

I know what you’re thinking: “Wait, who is Kevin Anderson? And how popular is tennis, really?”

The hard-serving, 6′ 8″ Anderson is currently the fifth ranked men’s player in the world¹, having reached the finals of two grand slam tournaments since 2017. You might remember this incredible left-handed shot (Anderson is a righty) after having tumbled to the grass late in his marathon, 6 hour-plus 2018 Wimbledon semifinal vs. John Isner that propelled him to the final.

As to tennis’ popularity, a 2018 WorldAtlas.com study reports that the sport has 1 billion fans globally, enough to make it the fourth most popular sport on the planet, trailing only soccer (#1 at 4 billion fans), cricket (2.5 billion), and field hockey (2 billion). To my knowledge, the only active eco-athlete who be more well known than Anderson is Mesut Özil, the German soccer star who currently plays for Arsenal.

Back to Wertheim’s mailbag.

The first question came from a reader in Toronto who asked, “When is tennis going to stop its environmentally unfriendly use of plastic?”

Instead of answering it himself, Wertheim gave Anderson, “tennis’ green czar” (who knew??), the court.

An excepted version of Anderson’s reply reads this way:

That your question was submitted to Jon Wertheim’s mailbag makes me very pleased to know that tennis fans are also taking the plastics issue seriously.

Reducing plastic pollution — and particularly keeping plastic waste out of the oceans — is one of my biggest passions. In fact, in December I hosted a charity event at home in Florida with a portion of the proceeds benefitting Ocean Conservancy’s Trash Free Seas Alliance. Once your eyes are opened to the plastic pollution problem, it’s hard not to care about the consequences. I hope that tennis players can be leaders in this space to raise awareness and help make the public more mindful of reducing single-use plastics when possible.

As a member of the ATP Player Council, I’ve been sharing my passion for this issue and last November, the ATP developed measures to reduce its negative impact on the environment at the Nitto ATP Finals in London. For the first time ever, players were given reusable bottles for on-court use, staff were given reusable bottles and encouraged to refill them at water stations, and fans were given reusable cups when they purchased drinks at The O2 (Arena). There are many more things that can be done in the future, but I believe this was a great first step in the right direction.

I’m hopeful we can continue to make other changes, such as do away with plastic racquet bags after re-stringing (which I always politely decline or make sure to recycle), put recycling bins at all tournaments for fans to dispose of their rubbish properly (and on the practice courts for players), and most importantly – provide education. If we can get more and more tournaments, players and fans to recognize the issue we have on our hands, and just how dire of a situation it is, we can make more change.

GSB’s Take: So glad to hear Kevin Anderson is leading the anti-plastic ocean waste movement on the ATP Tour. Hopefully he is recruiting others, including his women’s tennis counterparts, to join his effort. And if his interest in plastic waste becomes an on-ramp to a broader commitment to the climate change fight, all the better.