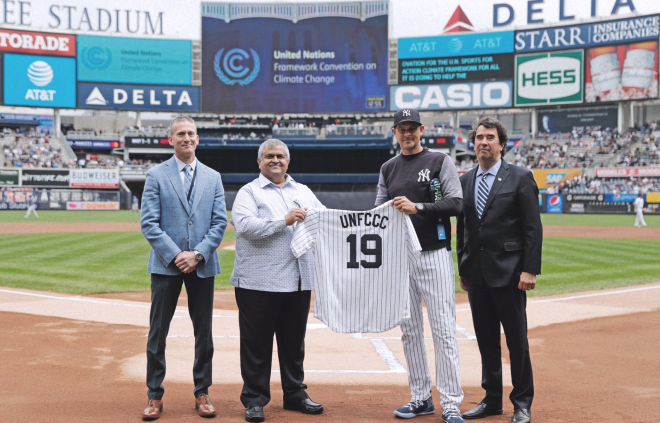 — The trade of quarterback Josh Rosen was one of the biggest stories to come out of last weekend’s NFL Draft. Post-draft, Rosen’s climate and environmental activism somehow became linked to the trade, at least on social media.

— Meanwhile, the UN’s Sports for Climate Action platform received a huge boost when the Green Sports Alliance agreed to sign on.

— And the Netherlands continues its environmental leadership by paying people to ride their bikes to work.

There were two bizarre aspects to the trade of quarterback Josh Rosen from the Arizona Cardinals to the Miami Dolphins during the second round of last weekend’s NFL Draft in Nashville.

#1 The Arizona Cardinals selected quarterbacks in the first round two years in a row, something that has only happened once before in NFL history¹.

In 2018, the Cardinals moved up in the first round to choose Rosen with the tenth overall pick. Given the high value of that pick, Rosen was seen as the future of the franchise. That future lasted one frazzled season — his surrounding cast was weak, the UCLA product struggled, the team ended up with the worst record in the league, the coaching staff was fired, a new coach was hired, and the new head man professed unabashed love for Kyler Murray, the 2018 Heisman Trophy winning QB from the University of Oklahoma.

As a reward for having the worst record in the NFL, Arizona owned the first overall pick in the draft, and they used it grab Murray.

That meant Rosen had to go and the Dolphins, with one of the worst quarterback situations in the league, were happy to grab him for only a second round draft choice.

#2 Rosen’s interest in climate change and the environment became a rationale for Arizona’s desire to get rid of him.

The Rosen trade went down last Friday, the second day of the three-day draft. This tweet went up on Monday:

Rosen’s interest in the environment seemingly plays into one of the main criticisms about him: Too smart for his own good, always questions things, wants to understand the why of everything.

Color me crazy, but all of those critiques sound like strengths.

And how does an interest in the environment have anything to do with the way Rosen actually plays quarterback? I’m sure he is not thinking about the parts-per-million of CO₂ in the atmosphere as he’s about to get clobbered by a posse of hungry and angry defenders.

A couple hours after the first tweet, Rosen was quoted in another, reacting to the media kerfuffle that resulted from his decision to unfollow the Cardinals on Instagram after they drafted Kyler Murray to replace him.

Parley for the Oceans is a non-profit that partners with adidas to produce apparel and footwear made from plastic ocean waste.

Rosen nailed the idiocy of people getting annoyed that he unfollowed the Cardinals, generating free publicity for Parley’s important work cleaning the oceans at the same time.

While the jury is still out on Rosen as an NFL quarterback — he had a statistically awful rookie season but, as mentioned above, he was stuck in a bad situation, including playing behind a leaky offensive line in Arizona — it is clear he knows his stuff when it comes to climate change.

Here’s a quote from Rosen in the run-up to the draft a little more than a year ago that shows he is an eco-athlete to watch:

One cause I’ll champion is the environment. It touches everything. I mean, the war in Syria started because of the drought and famine that destabilized the country and led the population to revolt against the government. I know global warming is a partisan issue for some stupid reason, but it touches everything.

Being traded to a quarterback-needy team located in sea level rise-threatened South Florida could be a win-win; for the Dolphins and the climate change fight.

On the one hand, I love that Rosen is an eco-athlete who actually talks about the environment and climate change in public. If he does well on the field and continues to speak out on climate off of it, that will be a very good and important thing indeed.

On the other hand, I’m a New York Jets diehard. They and the Dolphins are big rivals so cheering for Miami has never been an option. And in last year’s draft, the Jets picked a rookie quarterback of their own in the first round. Sam Darnold of USC showed flashes of potential to be their first franchise signal caller since the days of Joe Willie Namath a (very long) half century ago. So he and Rosen will also be rivals for perhaps the next 10-15 years.

I can’t switch from the Jets and Darnold — that’s too ingrained in my DNA. But aside from the two annual Jets-Dolphins matchups, I will pull for Josh Rosen.

The Green Sports Alliance marked Earth Week by launching “Playing for the Next Generation,” a campaign designed to encourage its members and partners to commit to the United Nation’s Sports for Climate Action Framework.

The Framework, which the UN kicked off in December, is buttressed by five overarching principles:

Forest Green Rovers, the English League Two football club and, it says here, the greenest team in sports, is also a charter member. And, as reported in GreenSportsBlog on April 23, the New York Yankees became the first North American sports organization to sign a pledge to support Sports for Climate Action.

Now the Alliance has stepped up to encourage its 500+ members, including MLB, MLS, NBA, NFL and NHL, to commit to the Framework.

“The Alliance recognizes the vital need for the sports industry to address climate change and play a significant role in combatting it,” said Roger McClendon, Executive Director of the Alliance. “By supporting this Framework, sports teams are committing to work collaboratively with peers, sponsors, fans, and other relevant stakeholders to implement the UN’s climate action agenda in sports.”

GSB’s Take: The UN’s Sports for Climate Action Framework just got a big momentum boost with the addition of the Green Sports Alliance to its roster. The Alliance will no doubt promote support of the Framework to its many members. GSB expects to see 1) Alliance members large and small sign on, and 2) Sports for Climate Action to get a lot of attention at the Alliance’s annual Summit in Philadelphia in June. As for the Framework’s five principles, GSB hopes the Alliance and its members put particular emphasis on #3 (Educate for climate action) and #5 (Advocate for climate action through communication).

DUTCH WORKERS GET PAID FOR COMMUTING TO WORK; NEIGHBORING COUNTRIES GET INTO THE ACT

The Netherlands is a Green-Sports leader.

Ajax (AH-Yax), the country’s top soccer club with 25 first division championships and a contender for the European Champions League title this season, has deployed a Nissan Leaf storage battery at Amsterdam ArenA.

But it is at the grassroots level where the country’s Green-Sports leadership really shines through. Consider these two factoids:

Yes, the pervasiveness of bike paths makes commuting on two wheels safe. And the country’s flat terrain makes it easy for people to get around on their bikes. But, according to a story by Sean Fleming in weforum.org, the Dutch government gives the public a helpful leg up on to their bikes in the form of tax credits.

Every kilometer cycled to and from work can earn a Dutch citizen up to an extra 22¢US tax-free. And this is no longer unique to the Netherlands: A similar incentive is now available to bike commuters in neighboring Belgium.

Commuters are paid to ride their bikes to work in the Netherlands (Photo credit: Yves Herman/Reuters)

I know what you’re thinking: “What about the third Low Country, Lew? What about Luxembourg?!”

Not to worry. Luxembourg workers can take advantage of a $340 tax rebate to be used to buy a bicycle.

France, clearly looking to their Low Country counterparts, will enact a cycle-to-work reimbursement program next year.

While Great Britain is trying to figure out how to (Br)exit the EU, their Cycle to Work program mimics their counterparts (for now) on the continent. The UK operates a lease-to-own model allowing employees to get discounted bikes and equipment through their employer.

The employer buys the bike and leases it to the employee. Monthly lease payments are deducted before taxes, resulting in an after-tax savings of 32 percent for most taxpayers. A mileage allowance is also available for British cyclists who use their bikes for business purposes.

What about the USA?

Fleming reports there are “a range of tax breaks aimed at commuters in the US, too, including a $20 per month allowance for cycling expenses. However, the 2017 Tax Cuts and Jobs Act (aka “The Trump Tax Cuts”) changed all that and cycling costs can no longer be deducted from pre-tax pay, effectively making it a little more expensive for some American cyclists.”