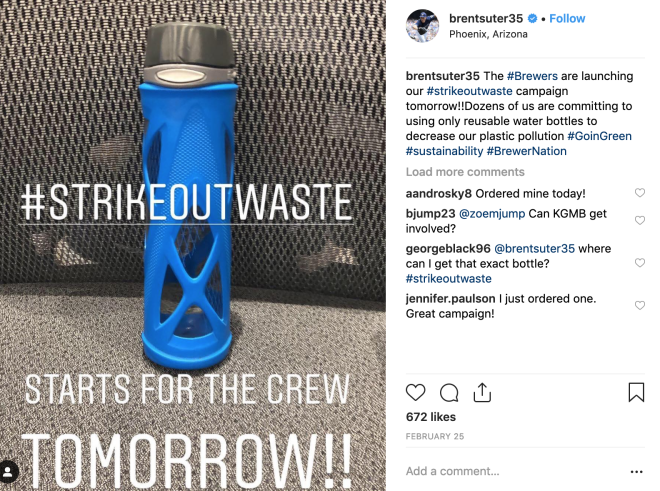 Brent Suter announced the launch of #StrikeOutWaste on Instagram in February

Twenty-nine year-old Milwaukee Brewers pitcher Brent Suter has more free time than usual this spring training as he is rehabbing from Tommy John arm surgery. And the eco-athlete is taking advantage of it, last month launching Strikeout Waste — an initiative designed to drastically reduce usage of plastic, one-time-use water bottles by Brewers players and staff — with his cousin Lauren Burke.

The Harvard grad is two thirds of the way through the year-long rehab process. If there are no major setbacks — Suter says he feels great and should be throwing off a pitcher’s mound soon — Brewers’ fans can expect to see the lefty back on a major league mound sometime in July, as the pennant race starts to heat up.

In the meantime, Suter and Burke are working to move Strikeout Waste from the drawing board to the dugout. The goal is to show fans that, if their favorite players and teams can reduce plastic waste, so can they.

“Think about a baseball TV broadcast immediately after the game’s final out,” offered Suter. “There’s always a shot of the players heading from the dugout to the clubhouse, with empty plastic water bottles strewn all over the place. This is not a good look, to say the least. So we aim to change the look along with player and fan behavior with Strikeout Waste.”

The idea for Strikeout Waste began to percolate between the cousins two and a half years ago but Suter’s main focus was on making the Brewers and, once he did, sticking with the big club. With more free time since his injury and subsequent surgery last summer, Suter started to take eco-action.

“We thought going with reusable water bottles would work on several levels,” Suter recalled. “It’s something everybody can do to save a lot of plastic waste. Fans can easily relate to it. And it shouldn’t be that hard to change players’ and fans’ behaviors, ideally taking most people just a few days to get used to using a reusable water bottle and have it become like an appendage.”

Suter and Burke engaged Chicago-based LW Branding to help them flesh out the concept during the offseason. Then, at the start of spring training, they created a partnership with Suter’s favorite water bottle brand and had reusable bottles shipped to the spring facility.

“We ended up choosing a bottle from Zulu Athletic,” reported Suter. “It’s made out of high-quality glass that is also hard to break, with a pop-off lid perfect for frequent use in the dugout, clubhouse and everywhere else.”

The duo is starting small — Suter distributed about 100 total bottles from several test vendors during the early part of spring training to eager Brewers players and staff and he expects his first order of 100 Zulu Athletic bottles to arrive in the next week so the rest of the organization has them — but they have big plans.

“Since I will still be rehabbing here in Arizona once spring training ends next week, I am going to try spreading the campaign to the Arizona Diamondbacks through shortstop Nick Ahmed, who is already into it!” Suter said. “Cincinnati Reds second baseman Scooter Gennett is another guy who I am confident will advocate for it.”

Brent Suter gets the last word: “We need to show fans that their favorite athletes care about about plastic waste, climate change and the environment more broadly. Some portion of those fans will take positive environmental action. Of that I have no doubt.”

“Green Games” are rapidly becoming commonplace among a wide swath of North American pro and college teams, a sure sign that Green-Sports 2.0 — i.e. fan engagement — is here.

So I wasn’t all that excited when the news that the Winnipeg Jets hosted their second annual Go Green Night at Bell MTS Place last Thursday came across my transom. Don’t get me wrong: I’m glad the Jets are having Go Green Night — it’s just that it didn’t seem that newsy anymore.

That is because the Jets invited Climate Change Connection (CCC), a program of the Manitoba Eco Network, to interact with fans in the arena’s concourses during the Green Game. CCC’s mission is to make Manitobans aware of the facts surrounding climate change and to inspire them to take action to reduce greenhouse gas emissions and to build climate resilient communities. The organization promoted ways for Jets fans to act on climate, and provided easy-to-digest information on how to go about it.

Of course, you may ask, “Lew, the Jets Green Game partnership with CCC doesn’t sound unique. Why are you so excited about it?”

I am excited because True North Sports & Entertainment, the owner of the Jets and MTS Place felt comfortable having an organization called Climate Change Connection interact with its fans in a very public way.

Since the Green-Sports movement’s beginnings around 15 years ago, teams and leagues have done a terrific job greening the games, from improving energy efficiency to on-site renewables, to much, much more. But they didn’t communicate about their greening initiatives much to their fans during this Green-Sports 1.0 era. Climate change? It was mentioned rarely.

We are in the early days of the movement’s fan engagement-focused 2.0 iteration. This era is unfolding in the same time period as the release of a devastating report from the UN Intergovernmental Panel on Climate Change. It asserted that humanity has 12-15 years to decarbonize significantly if it is to avoid the most calamitous effects of climate change. With that as backdrop, it says here that the sports world can no longer afford to play it coy when it comes to talking about climate change.

This does not mean fans should be bludgeoned by climate change. After all, they’re at the arena or stadium to enjoy a game.

But there’s a great deal of space between bludgeoning and saying nothing.

Climate change-themed public service announcements on the scoreboard here and there wouldn’t hurt.

Nor would having a group called Climate Change Connection interact with hockey fans at an arena concourse.