Greening of Golf Continues: PGA of America and Constellation Partner on Sustainability

Greening of Golf Continues: PGA of America and Constellation Partner on Sustainability

The PGA of America announced what it called a “transformative” partnership with Constellation in which the energy services company became the PGA’s Official Energy Provider and Sustainability Partner. GreenSportsBlog attended the New York City press conference on September 1 at which top executives from the PGA, Constellation and the Green Sports Alliance discussed the multi-year partnership’s potential to take the already-greening golf industry to the next level. 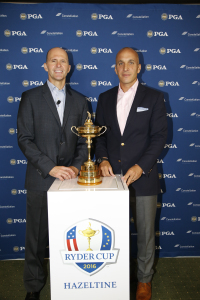 Joe Nigro (l), CEO of Constellation, and Pete Bevacqua, CEO of the PGA of America flank the Ryder Cup at the New York City press conference at which they announced their multi-year sustainability partnership. (Photo credit: PGA of America)

Constellation, a subsidiary of Exelon (NYSE: EXC) and the largest competitive energy supplier in the US, is a leader among corporations at the intersection of Green + Sports. Its groundbreaking sustainability partnership with the NHL, launched in 2014, has helped the league move towards carbon neutrality, a first for any North American professional sports league.

Last Thursday, the company added to its roster of high profile Green-Sports initiatives by becoming the Official Energy Provider and Sustainability Partner of the PGA of America.

Founded in 1916, the PGA of America bills itself “as the largest working sports organization in the world, comprised of more than 28,000 dedicated men and women promoting the game of golf (i.e. teaching pros, club professionals, etc.) to everyone, everywhere.” It manages the PGA Championship, the KPMG Women’s PGA Championship, the KitchenAid Senior PGA Championship, and the Ryder Cup when it is contested in the USA#. And there are 10,000 golf courses with which it is affiliated.

Constellation will help the PGA of America minimize the environmental impact of those signature events through a variety of measures, including the deployment of energy efficiency technologies and the use of Green-e® Energy Certified Renewable Energy Credits or RECs. The company will also help green the PGA of America headquarters in Palm Beach Gardens, FL and properties such as Valhalla Golf Club in the Louisville, KY area. The partnership will tee off soon: Constellation is working to minimize the carbon footprint at the 2016 Ryder Cup at Hazeltine National Golf Club in Chaska, MN which takes place September 27 – October 2.