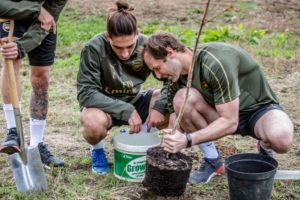 After switching to renewable energy through its partnership with Octopus, the 13-time English champion wants to cement its sustainable reputation through tree planting projects.

A wood of 500 trees will be planted by Arsenal Football Club at its London Colney training ground in a bid to enhance its reputation as the Premier League’s sustainability pioneer.

The first 100 trees of ‘Colney Wood’ have been planted by first-team players Hector Bellerin, Petr Cech and Aaron Ramsey, alongside two young fans. An additional 400 trees will be planted throughout the 2018/19 football season.

Last year, Arsenal planted almost 2,000 trees in 50 schools across the UK with the support of its energy partner Octopus, which provides renewable energy to all three of the club’s main facilities – its 60,000-capacity Emirates Stadium, London Colney and Hale End youth development centre.

Octopus has been providing ‘green’ electricity to Arsenal since 2017, helping the club save seven million kilograms of carbon over that period – enough to fill the Emirates Stadium almost four times.

It has also installed a water recycling system at London Colney to reuse water that comes from the pitch, leading Arsenal to position itself as the “first Premier League team to go green”.