GreenSportsBlog
By Lew Blaustein
Writing At The Intersection of Green & Sports

Dr. Allen Hershkowitz is, without doubt, one of the Founding Fathers of the sports greening movement. From his initial efforts in the mid-2000s leading the Philadelphia Eagles’ early greening initiatives while working for the Natural Resource Defense Council (NRDC), to being one of the founders of the Green Sports Alliance in 2010, to his current role as Alliance President, Allen has seen it all. And he says he that Super Bowl 50 is as ambitious as any mega-event he has ever seen when it comes to sustainability. 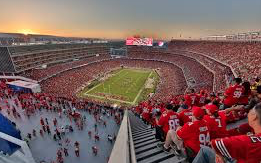 Levi’s Stadium in Santa Clara and site of Sunday’s Super Bowl 50 is, per Allen Hershkowitz, one of the “most environmentally intelligent sports venues in the world.”

Allen Hershkowitz has closely followed the work of the Bay Area Super Bowl 50 Host Committee (SB50 HC) and its Sustainability Director, Neill Duffy, and is not surprised at the breadth of the sustainability program of America’s biggest sporting event. “I know Neill well,” offered Hershkowitz, “and he was deeply involved with the sustainability effort of the 2012 London Olympics, which, up ’til now, was the gold standard of sustainable mega-sports events. I knew Super Bowl 50 was in good hands, sustainability-wise, when I heard Neill was on board.”

T0 date, the traditional (and very important) sustainability approach taken by most mega-sports events (i.e. Olympics, World Cup, Super Bowl) has been to measure carbon emissions and waste and do what was possible, technologically and cost-wise, to limit both. But that wasn’t enough–at least not the way Duffy and Hershkowitz view sustainability.

The SB50 HC is taking a much broader view of the term sustainability. Hershkowitz: “It’s not just carbon, it’s not just waste, it’s not just the environment–those are, of course, critical–but it’s also about using Super Bowl 50 to do good socially and economically for the Bay Area. That is what Net Positive (Super Bowl 50 as a platform to do good – socially, environmentally and economically – for the benefit of the entire Bay Area) is about. And it’s brilliant.”