The NBA had one of the strongest showings of the evening, winning the Sports League of the Year award, and seeing Commissioner Adam Silver named the Sports Executive of the Year. Over the past year, the NBA has demonstrated the compatibility of sustainability and economic vitality. In addition to the work of its franchises, 13 of whom are also Green Sports Alliance members, the NBA held its seventh annual Green Week in late March and continues to promote green practices both internally for its teams and venues as well as externally to its broad global fan base. 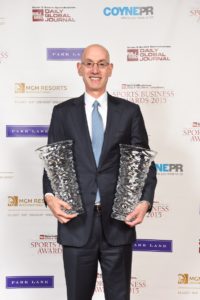 Levi’s Stadium, which received the award for Sports Facility of the Year, has also demonstrated an aggressive commitment to maximizing its environmental performance. The stadium was designed to meet LEED Gold standards, and includes an innovative recycled water system that irrigates the playing field, provides all water for toilets, and also provides water for a 27,000 square foot green roof. Levi’s Stadium is home to the San Francisco 49ers.

The Los Angeles Kings, winners of the 2014 Stanley Cup, were named the Sports Team of the Year. Among their biggest sustainability projects was the installation, in partnership with the NBA’s Los Angeles Clippers, of an LED lighting system that reduces energy costs at the STAPLES Center by an estimated $280,000 annually.