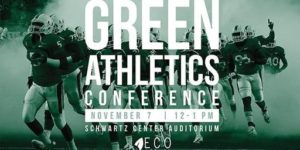 Students and employees gathered at the University of Miami’s Schwartz Center on Nov. 7 for the annual Green Athletics Conference. The event brought speakers onto campus who shared their experiences and taught attendees how to increase sustainability in collegiate athletics.

This year, the speakers were Jeff King, vice president of facilities at the Miami Marlins stadium, and Dave Newport, director of the environmental center at the University of Colorado Boulder. In their speeches, they both shed light on the recent strides in sustainability initiatives.

Here in Miami, Jeff King has been working to transform the way the Marlins do business. The baseball team has significantly lowered its waste production and now recycles a high percentage of its output. Since 2013, the Marlins have consistently had the lowest waste production of any team in the eastern conference, and ranked sixth among all MLB teams in recycling efforts.

But King said the Marlins are not stopping there.

“Just over a year ago we had a change of ownership,” said King. “The previous owner did not care much about our green efforts. We are in the midst of a whole bunch of marketing and rebranding to really begin to promote sustainability.”

The Marlins’ upcoming changes include implementing a waste processing mechanism, which would aim to transform Marlins Park stadium into a zero-waste facility. King also has plans to convert all stadium lights to more energy-efficient LED lights.

“This will not just be a great start for the Marlins, but for Miami as well,” King said.

However, King also described the problems that his team has faced in their mission to make athletics more sustainable.

“One of our challenges is that our population in South Florida really hasn’t adopted the culture of recycling yet,” he said.