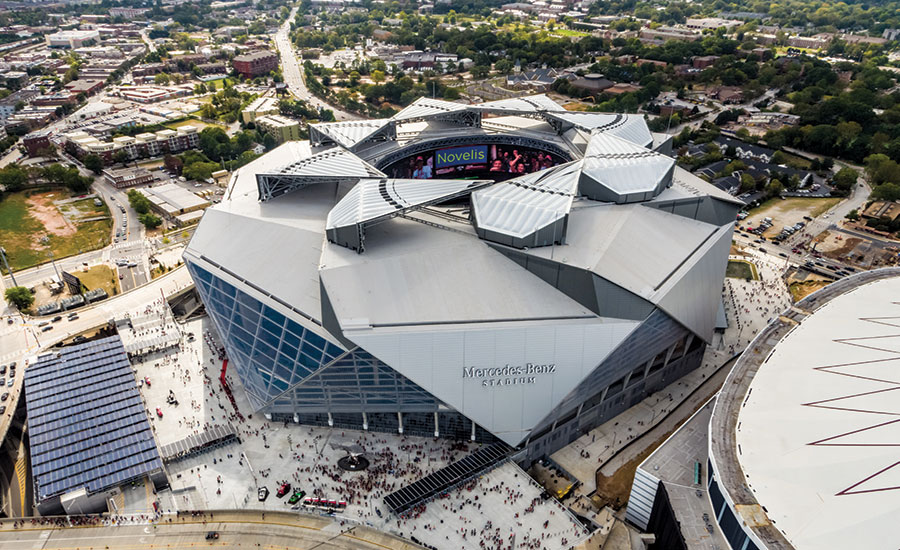 Though it remains to be seen whether the Atlanta Falcons will meet expectations for the season, the National Football League team’s athletic facility has already earned the highest marks when it comes to being green. In mid-November 2017, the 2 million-square-foot Mercedes-Benz Stadium in Atlanta became the world’s first LEED Platinum–certified professional sports stadium.

Designed by HOK and home to the Falcons and the Atlanta United Major League Soccer (MLS) club, the stadium hosts 4,000 photo-voltaic (PV) panels, which should generate 1.6 million kilowatt hours per year—enough to power nine football games—and has enough electric vehicle connections to charge 48 cars at once. Among its many other green features, a 680,000-square-foot cistern can store 2 million gallons of rainwater, for both water-conservation and flood-control purposes. (The project sits at the top of the Proctor Creek watershed, just north of flood-prone downtown Atlanta.)

Worldwide, there are more than 30 LEED-certified sports venues, according to the U.S. Green Buildings Council (USGBC), but with 88 LEED points of a possible 110—the most of any athletic facility to date, and notably earning all possible credits for water—the Mercedes-Benz Stadium is the most impressive, and most recent, example of a growing trend. “Seven or eight years ago, we’d have to bring up the topic of sustainability with clients,” says architect Chris DeVolder, the sustainable design leader for HOK’s sports, recreation, and entertainment practice, who worked on the Atlanta stadium for almost four years. “Now we’re talking about it on every project.”

The Georgia venue completes a triumvirate of Platinum projects at different scales: in September 2016, the Sacramento King’s Golden 1 Center by AECOM became the first professional arena to earn Platinum, and five years before, in October 2011, the USGBC named Apogee Stadium by HKS, at the University of North Texas, the first Platinum collegiate football stadium in the nation.