Dr. Allen Hershkowitz is known as “The Godfather of Greening” for his tireless work in making environmental responsibility understandable and achievable for everyone as the co-founder and president of the Green Sports Alliance.

Now, his efforts have reached new heights through the NHL and NHL Green. 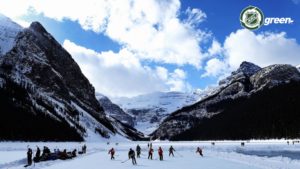 Hershkowitz’s nickname, given to him by Yoga and Joyful Living magazine in 2009, fits him well. He began advising companies on the importance of ecology in the 1980s. His clientele included Disney, Warner Bros. Warner Music Group and Fox Music Studios before he worked with the NHL, Major League Baseball, the NBA and Major League Soccer. He started a greening program for the Motion Picture Academy and created the Broadway Green Alliance before co-finding the Green Sports Alliance.

The mission statement of the Green Sports Alliance is promoting healthy, sustainable communities by inspiring sports leagues, teams, venues, and their partners and fans to embrace renewable energy, healthy food, recycling, water efficiency, species preservation, safer chemicals and other environmentally preferable practices. The NHL climbed aboard in 2010 with NHL Green to address the effects of climate change and freshwater scarcity on the game of hockey. The League is promoting its first Green Week, through Saturday, to celebrate its commitment to environmental sustainability.

“NHL Green is one of the most important environmental initiatives being implemented by any organization of any kind in the world,” Hershkowitz said. “The NHL has huge visibility. It’s what we call a non-traditional ally in the environmental movement.”