By Jeff Peterson for The Foxboro Reporter 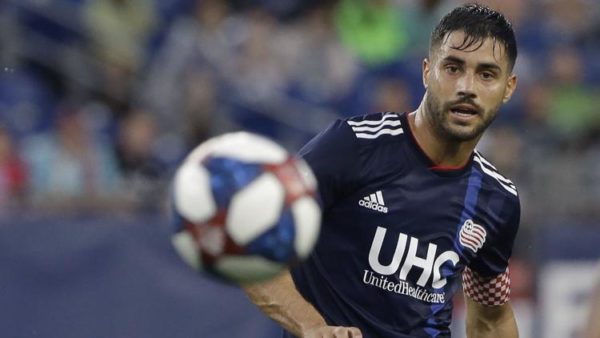 New England Revolution midfielder Carles Gil feels his teammates are coming together well as the MLS resumes its season in July. Gillette Stadium will be showing three upcoming matches in Florida at a drive-in, big screen at the stadium.

Selectmen have granted permission for Gillette Stadium to host New England Revolution ticket holders for a drive-in, big-screen viewing of three upcoming matches — all being played at the ESPN complex in Orlando, Fla.

According to Jess Enos, director of business development & external affairs for Kraft Sports Entertainment, the matches are scheduled for July 9, 16, and 21 — although that could change depending on the current MLS tourney format.

Enos said patrons — mostly Revolution season ticket holders — will be able to drive their vehicles onto the field in order to watch game action from the stadium big-screens. A temporary protective surface will be installed over the field, similar to that used during concert events, to prevent vehicles from damaging the turf.

She added that patrons will be able to bring their own food and drink into the stadium, but that all vehicles will be screened for alcoholic beverages. Lawn chairs will be permitted, provided patrons remain seated next to their vehicles.

Admission would have been limited to 400 vehicles, each spaced out at appropriate intervals.

This week, Enos said the concert proposal may no longer be viable given the likelihood that New England Patriots players are expected back at Gillette for pre-season practices.