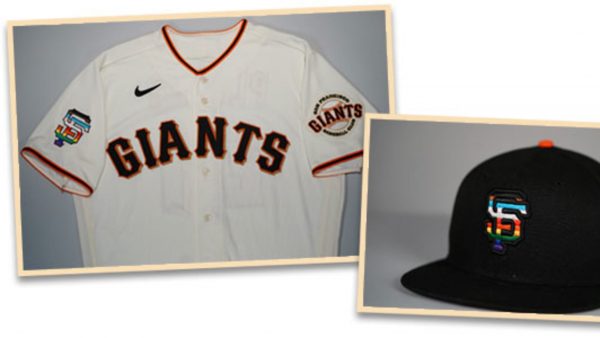 San Francisco, Calif. – The San Francisco Giants will kick off Pride Month by wearing an SF logo Pride Patch on the right sleeve of their home jersey and a custom cap that incorporates the Pride colors into the SF logo for their game against the Chicago Cubs on Saturday, June 5 at 4:15 p.m. PDT.

“We are extremely proud to stand with the LGBTQ+ community as we kick off one of the best annual celebrations in San Francisco by paying honor to the countless achievements and contributions of all those who identify as LGBTQ+ and are allies of the LGBTQ+ community,” said Giants President and CEO Larry Baer.

The 11 colors of the new Pride logo are emblematic of the Progress Pride Flag and signify inclusion and progression with the six pride colors – red (life); orange (healing); yellow (sunlight); green (nature); blue (serenity); purple (spirit); and black and brown to recognize LGBTQ+ people of color and light blue, pink and white to recognize people who are transgender.

In addition to the June 5 SF Pride Day, Oracle Park will also host Pride Movie Night at Oracle Park on June 11 & 12 in partnership with the San Francisco LGBT Pride Parade and Celebration.

Highlights of the events include:

The celebration of San Francisco and the LGBTQ+ community will take place during the first ever Pride Movie Night at Oracle Park. The ballpark will be transformed into the Bay Area’s biggest theater playing two films over two days spanning the 10,800 square foot 4K scoreboard. Before the movies begin, guests will experience the spirit of the world-famous SF Pride Parade in Oracle Park with special guests and performances.

The Giants have been partners with the LGBTQ+ community for many decades. In 1994 the Giants became the first ever professional sports team to host an HIV/AIDS awareness game during a time when infection rates and stigma continued to devastate the San Francisco community. This season marks the 28th Until There’s A Cure Day in partnership with Until There’s a Cure Foundation. The Giants were also the first professional sports team to join the It Gets Better Campaign in support of LGBTQ+ youth in an effort to combat all forms of bullying. In 2015 the Giants signed an amicus brief for marriage equality as it spoke directly to the organization’s core values of equality and social justice for all people.