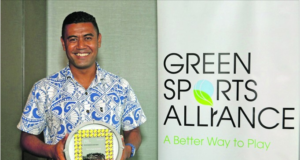 Dwain Qalovaki with the Green Sports Alliance 2018 Innovator of the Year award for advancing connections between sports and waste management by hosting the first Oceania Region Plastic Free tournament at Raka7s across staff, stadium venue, food vendors, fans and community. He received this award on June 27, in Atlanta in USA.

The two-time international award-winning sustainability manager said: “My first interna­tional award was from the Inter­national Union of Conservation of Nature (IUCN) in 2016,” he said.

“I was one of three people around awarded for growing in­digenous participation in sustain­able sea transport initiatives.”

Mr Qalovaki is a trustee of the Uto ni Yalo.

“The Uto ni Yalo is a 72-foot, so­lar and wind-powered vessel and we have circumnavigated the world twice and we have been to 15 countries in the Southern and Northern hemispheres,” he said.

“At the Green Entrepreneurship Workshop, my job was to liaise with almost 20 Green Entrepre­neurs about how we create busi­ness opportunities in waste.

“Some of the things was to talk to them about the fact that we need to read the National Indica­tors around statistics.

“It’s not good enough to just do a feel-good piece where we are try­ing to save the environment.”

He has also won a Global Green Sports Alliance in Raka 7s.

Mr Qalovaki said that Naboro landfill, which is the main land­fill for the whole country, accepts 180,000 kilograms of waste every single day.

“The Suva City Council (SCC), being the largest municipality, sends at least 80 per cent organic material,” he said.