With 250,000 spectators descending upon Paris at the end of the month for the Ryder Cup, organisers knew they had to protect fragile neighbouring habitats. The rest of French golf may look to do the same. 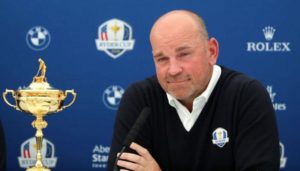 Danish golfer Thomas Bjorn is the European captain for this edition of the Ryder Cup.

A BIODIVERSITY PROJECT DEVELOPED TO mitigate the environmental impact of this month’s Ryder Cup competition could be replicated across all 700 golf courses in France.

Around 250,000 fans are expected to descend on Le Golf National in Paris between 25 and 30 September for the Europe vs US competition, disrupting the wildlife in the surrounding area by occupying – and potentially damaging – their habitats during play.

To reduce the negative impacts, the course and the French Golf Federation asked the Natural History Museum in Paris to audit all the wildlife and biodiversity in the vicinity of the playing area, subsequently putting a database and methodology together to help them minimise the damage.

Although the museum doesn’t have the capacity to audit all French golf courses, the methodology being defined can be implemented by other competition venues with the support of local naturalist bodies. Golf courses in Chantilly and Vidauban have followed Le Golf National by starting their own biodiversity audit, and others are being encouraged to do the same as part of a larger project called the Biodiversity Programme in French Golf.

Considering that France has the seventh-highest number of golf courses in the world (around 700) – occupying around 30,000 hectares of land throughout the nation – the positive impact on the environment could be significant if other course get on board. Indeed, taking inventory of biodiversity was highlighted as best practice by the International Union for Conservation of Nature’s (IUCN) research on sport and biodiversity.